Miss Spain comes out of the closet

A two-time national beauty queen for Spain has outed herself on Instagram as the first openly gay national pageant winner.
Patricia Yurena, Miss Spain in 2008 and again in 2013, recently posted a sexy Instagram pic of her and her lover, Vanesa Cortes, with the caption “Romeo and Juliet”— effectively announcing to the world which way this beauty queen swings.
The Miss Universe runner-up and Cortes, a DJ on the Spanish house circuit, are pictured cozying up in bed while gazing deeply into each other’s eyes.
Social media has openly supported the 24-year-old Castilian beauty queen, prompting her gratitude on Twitter: “Thanks to everyone for their comments,” she said. “I published the picture spontaneously and in an impulsive manner.”
Beauty pageants have historically been pretty, ahem, straight-laced. In 2013, Russia’s anti-homosexual laws tainted its Miss Universe pageant in Moscow — openly gay Andy Cohen pulled out of the hosting gig. 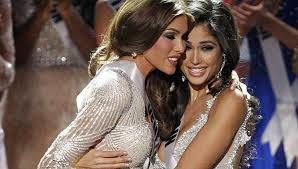