On his Facebook page dated February 7, 2015, Oscar Leopold Espinoza accused Alan Sim, the president of the Mister International Organization (MIO), of being a thief, as well as incriminating Korea's national director (whom he did not name). He also defended Julio Matute Rodriguez, Venezuela's national director, whose franchise has been taken away by Sim after Rodriguez opted to expose the truth about what is happening in Sim's organization.

Here's a screeshot of Espinoza's tirade: 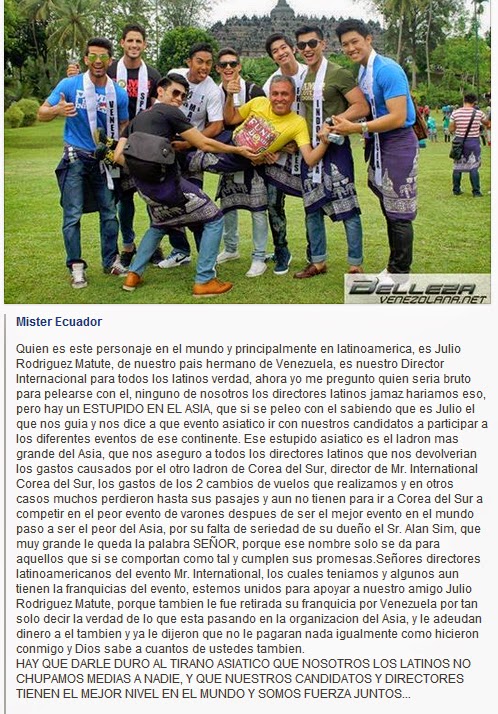 "Who is this character in the world and especially in Latin America? It’s Julio Rodriguez Matute, from our brother country Venezuela, who really is the International Director for all Latinos. Now I wonder who would be foolish enough to quarrel with him; none of us Latino directors would do that, but there is a STUPID MAN IN ASIA, who did quarrel with him knowing that Julio is the one who mentors us and who advices us to which Asian events should we go with our candidates. That stupid man is the biggest thief; he assured us Latino directors that he would reimburse us for all the expenses caused by the other thief from South Korea, the director of Mister International South Korea; the expenses for the two flight changes that we had to make, and in other cases many lost their airfares and don't even have the resources to go to South Korea a to compete in the worst male pageant. After being the best male pageant in the world, it became the worst of Asia due to the lack of earnestness of its owner, Mr. Alan Sim, for whom the title of SIR is unsuitable because that title is only given to men who are well-behaved and who keep their promises. To my dear Latin American directors of the Mister International pageant, some of whom used to have the franchise and some still have it, let's unite to support our friend Julio Rodriguez Matute, whose Venezuelan franchise has been taken away just because he chose to tell the truth about what is happening in the Asian organization; they owe him money and they already told him that they will not reimburse him, just like they did to me and God knows to how many of you also.

WE HAVE TO GIVE THE ASIAN TYRANT A HARD TIME AND THAT WE LATINOS DO NOT LICK SOMEONE'S BOOTS, AND THAT OUR CANDIDATES AND DIRECTORS ARE OF THE HIGHEST STANDARD IN THE WORLD AND TOGETHER WE ARE A FORCE."

Meanwhile, Luis Trujillo, the director for Haiti, Nicaragua and the Dominican Republic, posted on his Facebook earlier today the following rant, though much milder than Espinoza's: 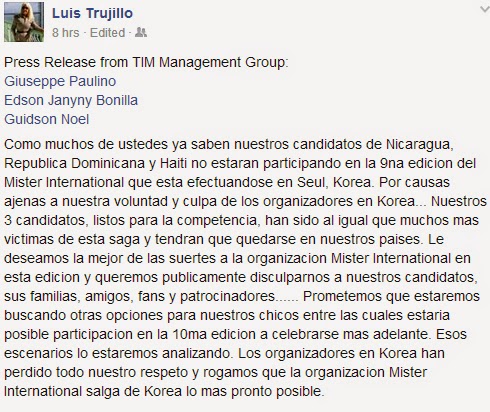 "As many of you may already know, our candidates from Nicaragua, Dominican Republic and Haiti will not be taking part in the 9th edition of Mister International which is taking place in Seoul, Korea. Due to reasons beyond our control and the fault of the organizers in Korea, our 3 candidates, who are ready for the competition, have been forced - along with many other candidates - to skip this year's competition and must therefore remain in their countries. We wish the Mister International Organization the best n this edition and we wish to apologize to our candidates, their families, friends, fans and sponsors. We promise that we will be considering other options for our boys including a possible participation in the 10th edition of the pageant. We will analyze those options. The organizers in Korea have lost all our respect and we hope that the Mister International Organization will move out of Korea as soon as possible."

A reliable source also notified me that Slovenia's delegate, Mitja Nadizar, arrived two days before the finals which is scheduled on February 12th, and that Sim's organization had paid for Nadizar's airfare. The organization also allegedly paid for the airfares of the candidates from Guam, Argentina, Poland and Puerto Rico - which alarmed other directors whose delegates were not given preferential treatment. I am sure this is just the beginning of a much larger story behind Sim's troubled organization and pageant, which considers itself to be the male version of Miss Universe. 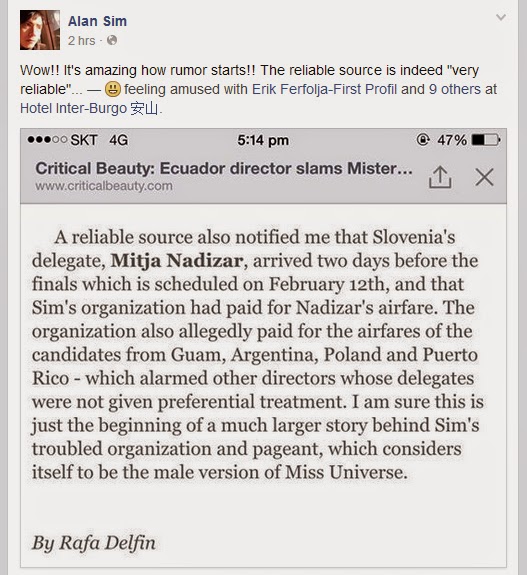 A reader just e-mailed me and said that it was Mr. Slovenia's parents who paid for his airfare. Ahhhh... The advantages of blogging over print. You can always edit anytime! Sim might find this all amusing, but I doubt very much if he'll have the last laugh, especially how he enraged many national directors. And instead of original 60+ countries that were supposed to compete this year, the number drastically dropped to 29! No amount of bullshit excuse(s) can cover up Sim and his cohorts' fraudulent intentions.

On his website, Belleza Venezolana, Venezuela's director Julio Matute Rodriguez posted an e-mail that Alan Sim had sent to all national directors in which Sim states that his organization will be "proceeding legal actions" against the Korean organizers for failing to fulfill their obligations, which included providing airline tickets to all directors. One wonders how Sim and his organization will be able to afford legal action since he is allegedly bankrupt.

Rodriguez explains that  out of the 31 candidates who withdrew, four never officially registered (Fiji, Guatemala, Portugal and Tonga), while four others failed to arrive due to visa problems (Cambodia, Nepal, Kyrgyzstan and Nigeria). Seven candidates withdrew because of the numerous date changes of the pageant (New Zealand, Switzerland, Vietnam, Germany, Peru, Macau and Latvia), and thirteen did not arrive in Seoul because they had never received their airline tickets as promised to them by the Korean organizers since September 26th last year. The countries affected by the missing tickets were Bolivia, Chile, Costa Rica, Dominican Republic, El Salvador, Spain, France, Haiti, Honduras, Netherlands, Nicaragua, Panama and Venezuela. The delegates from Slovenia and Puerto Rico, who also had ticket problems. arrived in Korea barely two days ago because they had decided to buy new airline tickets at the last minute.

Argentina's delegate, Daniel Cajiao, who had arrived in Seoul over a week ago, decided to withdrew officially from the competition last Monday. Meanwhile, Belgium's Fabio Ronti declined to compete for health reasons, and the U.S. representative Andrew Caban did not arrive either for unknown reasons.

Directors and delegates express their anger, frustration and disappointment. Chile's national director, Felipe Toledo Gaete, outlined his complaints: repeated breaches in the committed dates for the arrival, finals and departure of Mr. Chile 2014; lack of information and itinerary; failure to provide airline tickets due to constant date changes on the part of the Mister Korea organization; failure to fulfill the contract which stipulates that the candidates would be lodged in 5-star hotels, would be taken to a city tour, be given gym privileges, and be provided with meals paid by the Mister International organization; lack of veracity in the information sent to all national directors; distrust towards the Mister Korea organization as far as providing basic hospitality towards Mr. Chile.

Mr. Netherlands, Michael Glenn, posted the following status on his Facebook page, accusing the organizers of lying to him: 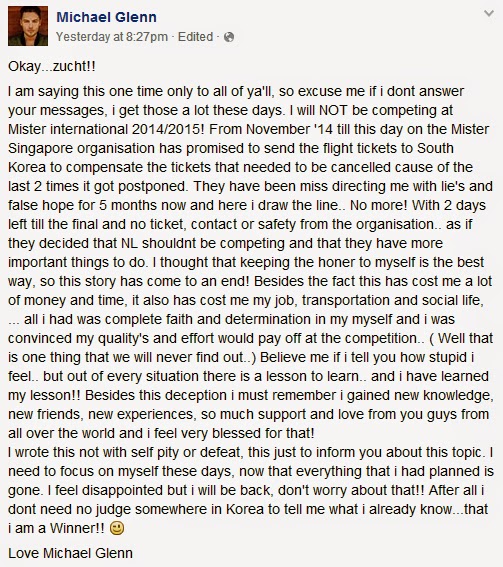 My translation : "Number of countries duped by Mister International, were charged with franchise fees, and who had their airline tickets - lost the tickets - because of the dirty trick that the director (Sim) played on a number of friends from other countries. It's sad how Mr. Alan Sim dropped his pageant and made enemies with many individuals who supported him, including Costa Rica!"

The finals of the Mister International 2014 pageant, which was supposedly to have taken place yesterday, February 12, has now been moved to Saturday, February 14. This umpteenth change in dates has inconvenienced several individuals including China's national director, Adam Lee, who is pissed because he had already bought his departure ticket for the 14th. He posted the following on his Facebook page early today:

Meanwhile, Ecuador's national director, Oscar Leopold Espinoza, deleted his February 7th posting in which he accused MIO president Alan Sim of being a thief and defended Venezuela's director, Julio Matute Rodriguez, whose franchise had been taken away by Sim after Rodriguez chose to tell the ugly truth about the organization. Why the deletion of the posting? Maybe because Espinoza's candidate, Eli Lopez Zamora, is allegedly one of the "favorites" for the title.

The mentor/coach for Misters Australia and New Zealand, Tito Schmidt Stowers, sent me a copy of an e-mail that he had just sent to MIO accusing the organization of failing to provide reimbursement to his candidates. Judge for yourself: 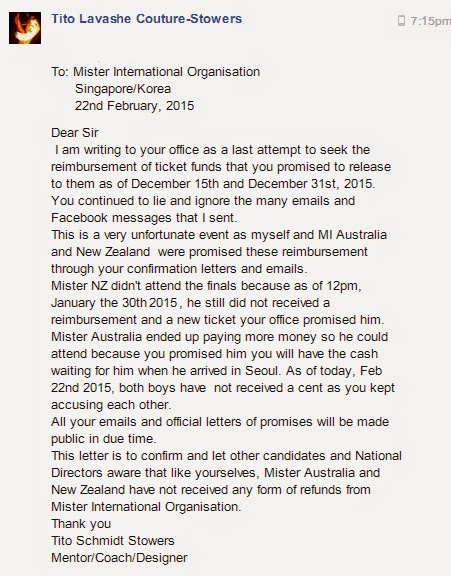 Ecuadorian director Oscar Leopold Espinoza posted the following comment on his Facebook page on May 4, 2015 in which he blasts Alan Sim for being a con artist, trashes the Mister International event, and praises Pradit Pradinunt and Mr. Global competition. 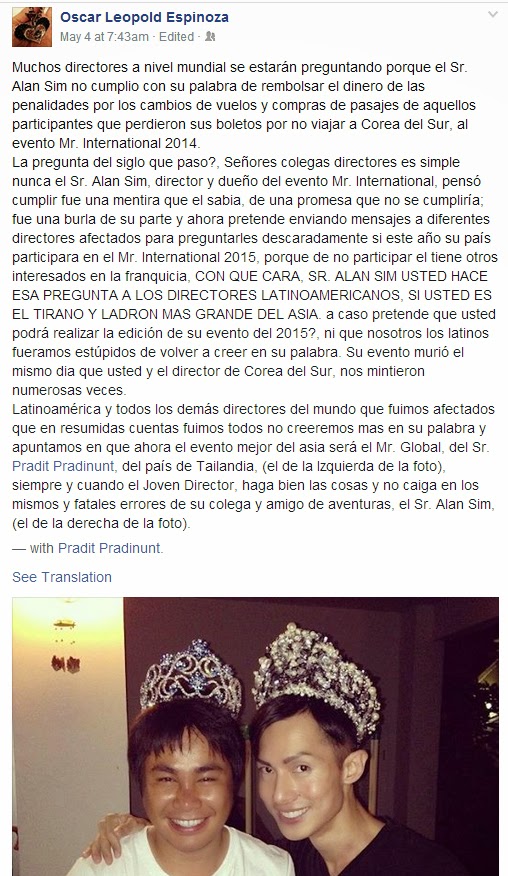 "Many directors around the world are probably wondering why Mr. Alan Sim did not keep his promise of reimbursing the cost of the penalties for the flight changes and airfare purchases of those participants who had lost their tickets for not being able to travel to South Korea to compete in Mister International 2014.

The question of the century. "What happened?" Esteemed fellow directors, it's simple.
Mr. Alan Sim, director and owner of Mister International, fulfilling a promise was a lie that he knew, of a promise that would not be fulfilled; it was a joke on his part and now he is trying to send messages to various disenchanted directors asking them shamelessly if their candidates will participate in Mister International 2015, because if they don't then he has other people interested in the franchise. HOW DARE YOU, MR. ALAN SIM, ASK THAT QUESTION TO LATIN AMERICAN DIRECTORS, WHEN YOU ARE THE BIGGEST TYRANT AND THIEF IN ASIA. Do you really think you'll be able to carry out your 2015 event? Or do you think that we Latinos are stupid to believe in your word? Your event died on the same day that you and the Korean national director lied to us many times.

Latin America - and all the other directors in the world who were affected - will no longer believe in you. From now on, we recognize that the best event in Asia is Mr. Global owned by Mr. Pradit Pradinunt of Thailand (photo, left); this young director always does things right and does not commit the fatal mistakes of his colleague and adventures companion, Mr. Alan Sim (photo, right)."