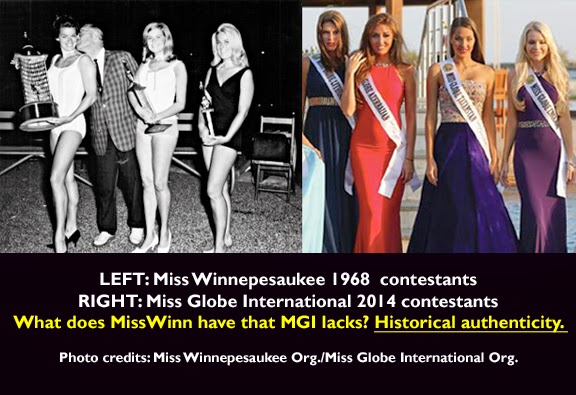 When you visit the official page, you will notice in the Historical Title Holder section that the pageant began in 1925. But don't let this fool you. When you click the links to the years 1925 until 1986, you will see images of alleged respective winners for those years. Why alleged? Because the images had been taken from the archives of the Miss Winnepausakee pageant, a preliminary to the Miss New Hampshire scholarship pageant.Thanks to Pageantopolis webmaster Donald West's outstanding detective work, we now know that MGI had resorted to stealing and infringing on intellectual property to make their pageant appear historically authentic. Shame on them!

West writes: "The Miss Winnipesaukee archives seems to have been used by Miss Globe International in Turkey as the basis for its 'history' from 1925 to 1986.  For those years when there was no information, the blanks were filled in with photos of movie actresses (all falsely identified) or a few winners from major beauty pageants elsewhere in the world.  It is not known if the Miss Winnipesaukee Organization is aware of this. Here are some examples." :

West initially brought this subject to my attention last January 2, 2014 via Facebook. Neither of us was certain if the Miss Winnipesaukee Organization knew about the situation, so I contacted the pageant from its website's Contact page as well as from Facebook, but no one from the organization responded to my inquiry. That was 15 months ago.

Meanwhile, here's a photo of Miss Globe International owner Rasim Aydin holding a framed certificate with Charlie See's name on it. Charlie See (R.I.P. 2007) founded MGI in 1925. There is another pageant also named Miss Globe which is based in Albania and run by Deliart Association, owned by Petri Bozo. Both Aydin and Bozo claim to be the "official" organizers, but that's another topic.

As a pageant fan and big supporter of the pageant industry, I always find it appalling that pageant organizers would resort to deception and/or inaccuracies just to create an impression that their pageant is legitimate. Fortunately, there are some pageant fans who are intelligent enough not to fall for these lies, and that is why those of us who care about integrity and honesty should support the earnest work of Pageantopolis and Critical Beauty, two pageant sites committed to researching the truth and exposing lies.