The brouhaha began when the eccentric president of  the Thailand-based Miss Grand International Organization (MGI), Nawat Itsaragirisl, posted on the official Facebook page of MGI on May 19, 2015 the following announcement - that he would take the current titleholder, Lees Garcia, and Miss Grand Kurdistan 2014 Dalia Hassan, with him to the Middle East to promote the organization's platform, "Stop The War And Violence" by visiting refugee camps in Kurdistan. Minutes after he posted the announcement, pageant fans rushed to express their major concern for the MGI team: would the team be guaranteed safety from any possible attack by the Islamic jihadist group, ISIS? 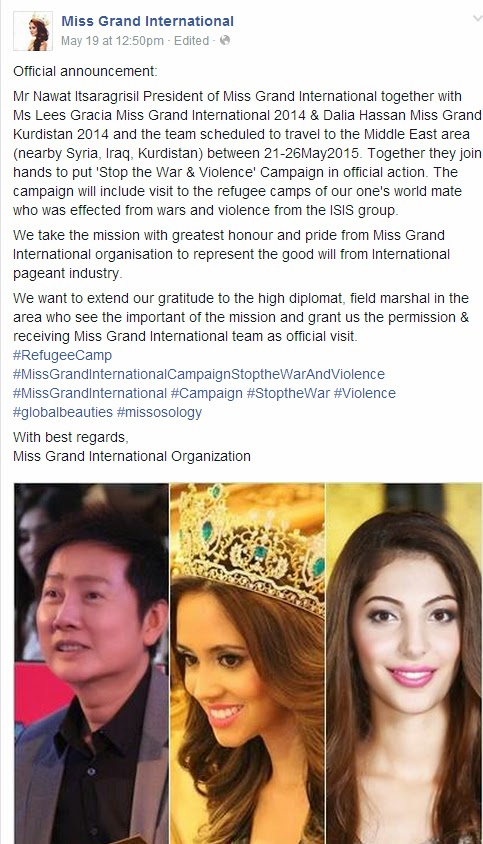 A day later, on May 20th, Lees Garcia posted on her Facebook page a statement reassuring her fans that she trusts the MGI organization in its risky endeavor. She sounds sincere, but she is also sincerely naive and foolish: 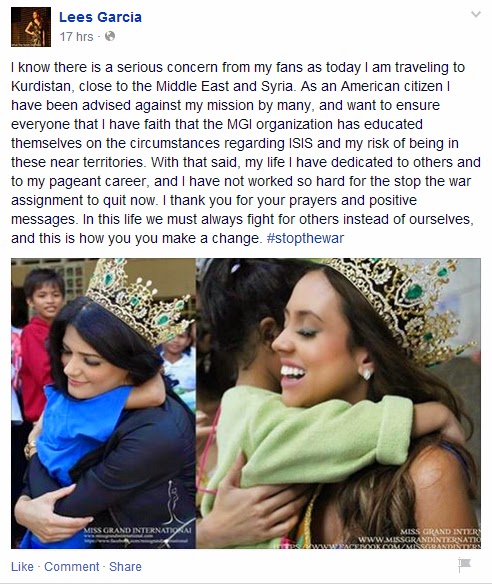 As I write this article, ISIS has just conquered the strategically and symbolically important city of Ramadi, and months after the Islamic terrorist group had conquered the major cities of Fallujah and Mosul. Nawat writes: "Together they join hands to put 'Stop the War & Violence' Campaign in official action." Seriously? What makes them so sure that they can stop the war and violence when even armed Iraqi soldiers could not escape ISIS's tremendous fire power? The truth is many of these Iraqi soldiers are so scared of ISIS that they have abandoned their posts and many of them are not at all committed to fighting the enemy.

There is absolutely nothing wrong with anyone or any group seeking to stop war and violence; in fact, it is noble and courageous, but can't you start by stopping the war and violence in your own backyard first? How about stopping the war against human trafficking in Thailand which is a source, transit, and destination country for men, women, and children subjected to forced labor and sex trafficking?  Instead of traveling to the Middle East and expose themselves to extreme mortal danger, the MGI team should be aggressively fighting against human trafficking in Thailand and lend voice to its hundreds and thousands of defenseless victims: this is more realistic and practical - and perhaps much safer - than some delusional and presumptuous mission to stop the war and violence in the Middle East. Granted, the MGI team will be visiting Kurdistan, a relatively safe region thanks to brave and well-armed Kurdish army who is fighting ISIS, but there's no guarantee that the team's mode of transport (chopper, truck, jeep, car, whatever) will not be bombed by ISIS from a distance. In war, anything can happen.

Lees' national director, Noemi Melendez, sent me a Facebook message expressing her concern about Lees' safety. She also said that she had contacted Nawat but he has never replied. 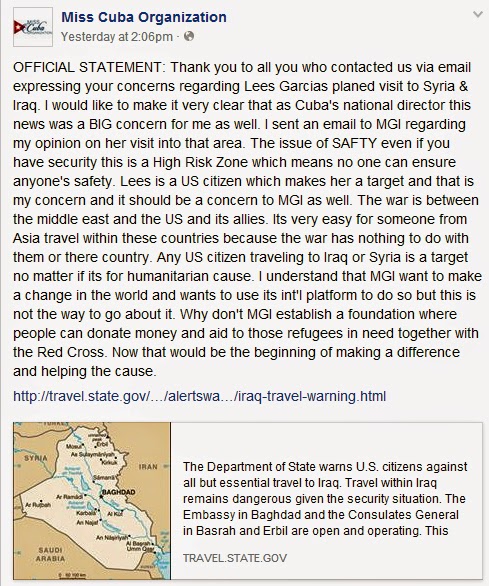 Despite pleas from her concerned fans, national director, and family, Lees packed her suitcases and headed to the airport. For a 5-day trip, she surely packed a luggage good for two weeks! We can only hope that at least two of these suitcases contain goodies for the refugees. 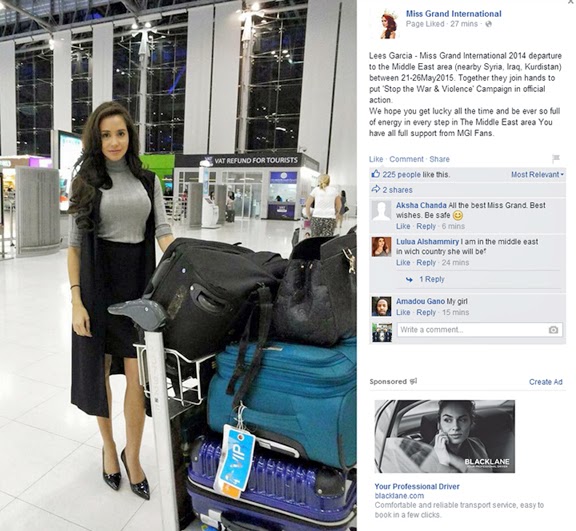 And what do Lees's parents think about her potentially dangerous trip near ISIS territory? Here's the official statement posted by Igxie Rivera, Lees's mother: 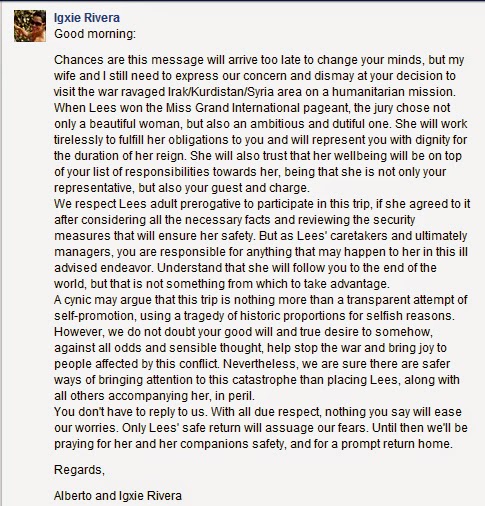 As you can see, the parents seem very conflicted as they express their anxiety over their daughter's safety and at the same time put complete trust in Nawat and his organization. The parents can't really do anything to stop their daughter because she is an adult who has made a choice which could bring severe consequences. So the least thing they could do is hope and pray for Lees's safe return.

Some of us would probably agree with the mother's statement that the trip "is nothing more than a transparent attempt of self-promotion, using a tragedy of historic proportions for selfish reasons." I myself believe that the trip is undeniably a shameless self-promotion for Nawat, perhaps a puerile attempt to portray himself as some sort of a Thai George Clooney, and for his fledgling two-year old pageant which recently has been demoted to a minor status by Missosology, the world's biggest and most popular pageant website, due to Nawat's alleged inappropriate business ethics. The best that Nawat could hope for - to save face and to regain the relevance of his pageant - would be a successful humanitarian outreach and a totally safe return from the trip. No one wants to get hurt or killed while doing charity in a war-torn region, and even though we are masters of our own destiny, there may be situations that we simply cannot control.