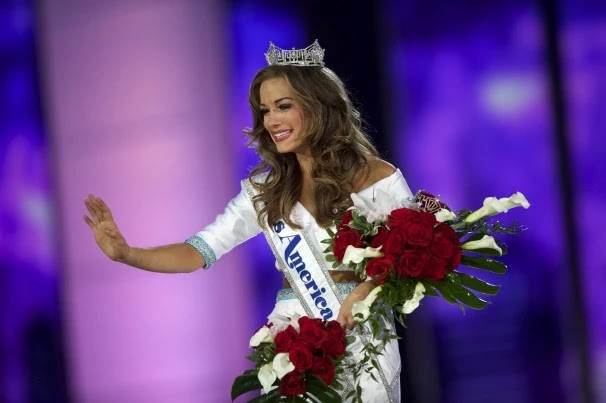 And your new Miss America is … Miss Georgia, Betty Cantrell, who thinks that Tom Brady definitely cheated during last season’s DeflateGate scandal!
Yes, this really was relevant during the pageant. Cantrell, a 21-year-old student at Mercer University, made it all the way to the Top 7 and the famously awkward Q&A portion of the evening. Although contestants always prep for current events questions, she had quite the bizarre query from judge/country singer Brett Eldredge.
[Vanessa Williams returns to Miss America, gets public apology from CEO for being forced to resign]
“New England Patriots quarterback Tom Brady was suspended for his part in the so-called ‘DeflateGate’ scandal, then reinstated by the courts,” Eldredge read off a card. “Legalities aside, did Tom Brady cheat?”
Cantrell stalled for time as she asked him to repeat it. Then she had 20 seconds to answer.”Did he cheat? Um, that’s a really good question. I’m not sure,” she said. “I think I’d have to be there to see the ball and feel it and make sure it was deflated or not deflated. But if there was question there, then, yes, I think he cheated. If there was any question to be had, I think that he definitely cheated, and that he should have been suspended for that. That’s not fair.”
The question (among others about gun control, Kim Davis and Planned Parenthood funding) was roundly mocked on Twitter, but Cantrell was still awarded the crown and a $50,000 scholarship at the end of the competition. 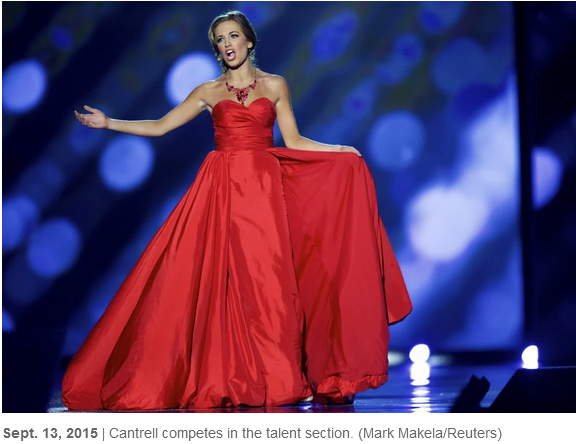 She also impressed the judges by wearing a crop-top evening gown: “I would say that my dress may be a little sexy because it’s a two-piece that shows, like, an inch of midriff — so, breaking ground,” she said. “But I would say it’s more classy and elegant than sexy.” She also briefly stumbled twice on the stage during the evening gown segment, obviously captured on social media, but it apparently didn’t matter.During the talent portion, Cantrell sang opera — “Tu Tu Piccolo Iddio” from Puccini’s “Madame Butterfly” — which already had won her top honors last week for the preliminary competitions.
Cantrell won over first runner-up Miss Mississippi Hannah Roberts; second runner-up Miss Colorado Kelley Johnson; third runner-up Miss Louisiana April Nelson; and fourth runner-up Miss Alabama Meg McGuffin, who was asked a question about Donald Trump during the Q&A segment, and announced that Republicans should be “terrified” of him as a GOP presidential candidate.
Source: The Washington Post, 9/14/2015