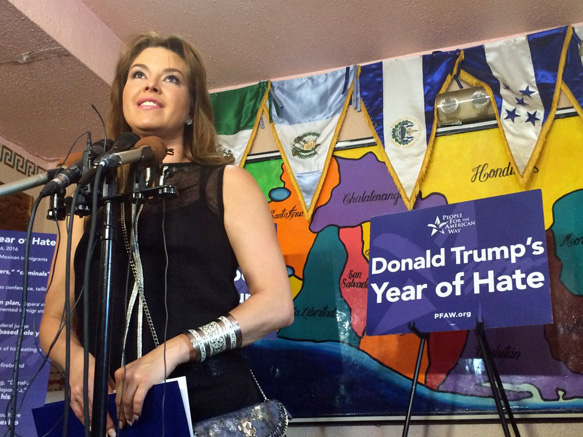 ARLINGTON, VIRGINIA — Venezuelan model and actress Alicia Machado says it took her many years to get over get over the abuse she suffered at the hands of Donald Trump when she was crowned Ms. Universe in 1996.
“He made me feel small,” she told ThinkProgress in Spanish. “He threatened me, treated me rudely. He called me ‘Ms. Housekeeping’ in front of his friends.”
Trump, then the owner of the beauty pageant, publicly mocked Machado for gaining weight and forced her to exercise in front of TV cameras. She said she was depressed and suffered from an eating disorder for several years as a result.
“He hates girls,” she said. “He considers girls to be less. We have another status, to him.”
Machado has lived in the U.S. for nearly 20 years now, and has a seven-year-old daughter who is a U.S. citizen. But she didn’t consider becoming a citizen herself until a few months ago, when Trump became the Republican Party’s presumptive nominee.
“It was like a great monster reappearing in my life,” she said. “In the beginning, I thought there was no way this loco will ever win. But after the primaries I realized I need to vote. I can’t invite my community to step up if I won’t do it myself.”
Machado says she became more motivated still after Trump attacked the judge presiding over charges of fraud against Trump University, arguing that because the judge has Mexican parents, he must be biased against Trump.
“Is he saying that if my daughter wanted to be a judge when she grew up, she couldn’t do it fairly because her mom is Venezuelan and her dad is Mexican?” Machado asked. “Would he not see her as American, even though she was born here? It’s absurd.”
Machado, who has passed her citizenship test and is now waiting for her passport to arrive in the mail, is one of hundreds of thousands to do so since Trump’s candidacy began. While it’s impossible to know how many are, like Machado, motivated by a desire to stop Trump from winning, reporting by ThinkProgress and other outlets suggest it’s a strong contributing factor.
Though applications for citizenship always increase during a presidential election year, this year is uniquely high.
If the trend continues, as many as one million new citizens will be casting ballots this November, and they could tip the balance of power in close swing states like Virginia, Florida, Colorado, Nevada, and Ohio. These new citizens are registering to vote at a higher rate than most Americans. New polling suggests as well that Trump’s rhetoric about Latinos is motivating those who are already citizens to become more politically active.
In a press conference this week in Virginia’s Arlington County — which has a large and rapidly growing immigrant population — Machado urged her fellow green card holders to apply for citizenship “right now, this month.”
“We are a free country, and we can’t give that up for a crazy, ignorant, ambitious, misogynistic despot who just wants to slake his thirst for power,” she said of Trump.