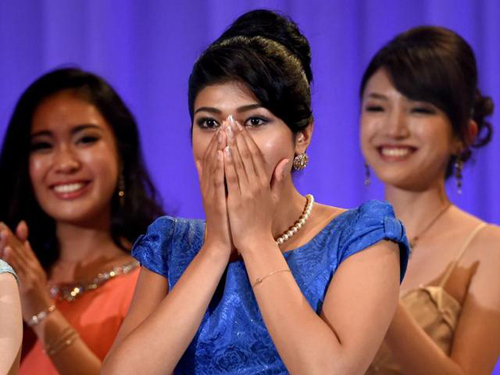 TOKYO • A half-Indian beauty queen with exotic looks and an elephant trainer's licence has been crowned Miss Japan.  Priyanka Yoshikawa's tearful victory comes a year after Ms Ariana Miyamoto faced an ugly backlash for becoming the first black woman to represent Japan, as critics complained that Miss Universe Japan should instead have been won by a "pure" Japanese rather than a haafu - Japanese for "half" - a word used to describe those of mixed race.


"Before Ariana, haafu girls couldn't represent Japan,"  Yoshikawa said after winning the title. "That's what I thought too... Ariana encouraged me a lot by showing me and showing all mixed girls the way."
Yoshikawa, born in Tokyo to an Indian father and a Japanese mother, vowed to continue the fight against racial prejudice in homogeneous Japan, where multiracial children make up just 2 per cent of those born annually.
"I think it means we have to let it in," said the 22-year-old, who speaks fluent Japanese and English, when asked what it signified for her and Miyamoto to break down cultural barriers. "We are Japanese. Yes, I'm half-Indian and people are asking me about my 'purity' - yes, my dad is Indian and I'm proud of it... But that does not mean I'm not Japanese."
Yoshikawa, like Miyamoto, was bullied, after returning to Japan aged 10 following three years in Sacramento in the US and a further year in India. "I know a lot of people who are haafu and suffer," said the 1.76m-tall Yoshikawa, an avid kick-boxer who earned her elephant trainer's licence to spice up her resume.
"When I came back to Japan, everyone thought I was a germ," she said. "Like if they touched me they would be touching something bad. But I'm thankful because that made me really strong."
Reaction to her victory did not initially trigger any real outrage, although there was some unhappiness. "What's the point of a pageant like this now? Zero national characteristics," groused one Twitter user, while another fumed: "It's like we're saying a pure Japanese face can't be a winner."
Yoshikawa will contest the Miss World crown in the US in December.