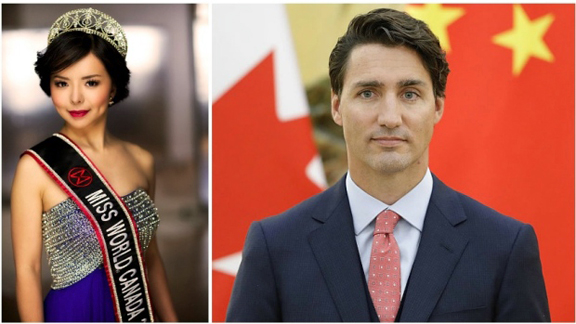 Chinese-Canadian activist, actor and beauty queen Anastasia Lin says Canada should be taking a harder line with China over human rights — and that failing to do so is putting Chinese Canadians in this country at risk.
"When I decided to speak out on human rights abuses in China, my father was threatened," Lin says "It's a classic communist M.O. to use family members or business of overseas Chinese to silence them. And that is my freedom of speech that is being threatened within Canadian borders."
In 2015, Lin was barred from entering China to take part in the Miss World 2015 final. She believes it was because of her political activism.
Now, as Prime Minister Justin Trudeau finishes the last leg of his first official visit to China, Lin says Canada should be unequivocal in its condemnation of China's human rights record.
"There's this misconception that by strengthening the economic ties, that political liberty will follow and they will gradually adapt to our values. But this hasn't happened in the last few decades of our engagement with China," says Lin.

The downside of compromise

Lin says China has too much on the line, economically, to ever refuse to do business with Canada. And she says Canada would actually get more respect from the Chinese government if Trudeau was firm in his condemnation.
"The Chinese government wants to see how far he [Trudeau] can be pushed. This is a classic Communist M.O. If you're tough enough, they'll back down. They respect you. But if they see that you are willing to compromise, they will push it all the way," says Lin.
But Lin says it's not just the human rights of Chinese citizens that are at risk. She says Chinese-Canadians with families back home are also afraid of speaking up, for fear of what could happen.
"I have a friend whose mother just went missing a few months ago. [My friend] lives in Ottawa, she's married to a Caucasian Canadian. Her mother went missing and the prison denied her existence, basically said that 'no we didn't capture her.' But from other sources, it was confirmed that her mother was in prison. And these cases, we don't get a lot of attention on them," says Lin.

The politics of a beauty queen dress

Lin says after she was banned from entering China, she was invited to an event at the National Press Club in Washington, DC. She was supposed to wear a dress from her Chinese-Canadian sponsor..
"But my dress sponsor told me they could no longer sponsor me because they received an e-mail from the Chinese consulate saying that they should stay away from me [because] I am bad news, or else," says Lin.
She says that shows the level of micro-management the Chinese government engages in.
"It's amazing. It's a dress sponsor of a beauty queen that's inside Canadian borders that's been threatened," says Lin.