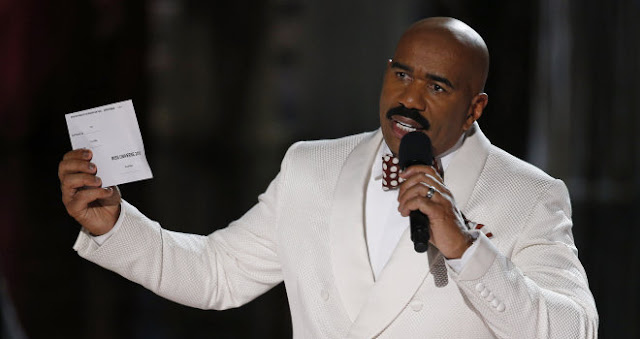 After his major -- and majorly embarrassing -- flub from the 2015 ceremony, Steve Harvey is hoping for some redemption: The comedian has been confirmed to return to emcee the 2016 Miss Universe pageant, set to take place in January.
For those who were living under an internet-free rock at the time, Harvey made the biggest mistake a pageant host can make back in December 2015 when he announced the wrong winner for the Miss Universe title. The comedian accidentally said that Miss Colombia, Ariadna Gutiérrez, was the 2015 champ, when she was in fact the first runner-up to the real winner, Miss Phillippines, Pia Wurtzbach. Gutiérrez was given the crown, sash, and a giant bouquet of flowers before the mistake was realized.
A sheepish Harvey had to return to the stage, interrupt Gutiérrez's celebration, and announce to the crowd that he had read the wrong name. He held up his cue cards as proof of his mistake, and immediately owned the error, telling the audience, "I will take responsibility for this. It was my mistake ... horrible mistake."
Despite that drama -- and all the public ridicule, and even death threats, that followed his blunder -- Harvey remained a good sport about the error, and the show's producers even publicly backed him, stating at the time that they'd love to have him back. Looks like they decided to make good on that promise.
The Miss Universe 2016 pageant will take place in the Phillippines on January 29, 2017. We're betting Harvey will bring some extra reading glasses with him this time around.
Source: MovieFone, 12/15/2016
at 5:18 AM