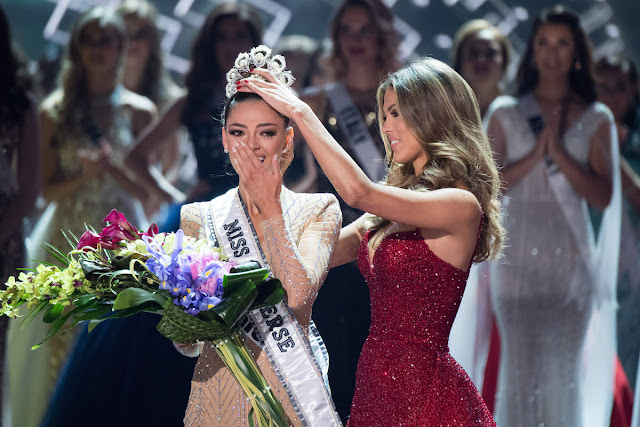 Las Vegas, Nevada – November 26, 2017 – Demi-Leigh Nel-Peters, a 22-year-old business management from Western Cape, South Africa, was crowned Miss Universe 2017 at the AXIS at Planet Hollywood in Las Vegas, Nevada. The telecast aired live on FOX for the third year in a row.  But compared to last year's U.S. telecast which started on time, this year's U.S. telecast was pre-emptied by an NFL game for the first twenty-five minutes, much to my disgust! Luckily, the show was live streamed on Facebook, which was a first in the pageant's history. I found myself watching the live stream on Facebook on my iPhone and the delayed telecast at the same time!

Nel-Peters was crowned by outgoing queen Iris Mittenaere from France. Nel-Peters' victory marks the second time that South Africa has won the Miss Universe crown (Margaret Gardiner won in 1978).  According to the Miss Universe website: "... in her spare time, Demi-Leigh is passionate about a program she helped develop to train women in self-defense in various situations called the Unbreakable campaign. She was inspired to launch it by the attempted hijacking she experienced earlier this year in Johannesburg. She plans to share these workshops and help as many women as she can." One wonders if Demi-Leigh had not been hijacked, then she would not have any interesting story to tell and perhaps might have barely made the cut.

Best National Costume: Japan, Momoko Abe.  The winners of this award usually wear the most colorful, the most elaborate, the most culturally significant, and yes, the heaviest costume - as in the case of last year's winner from Myanmar, Htet Htet Htun, who "wore" a traditional Burmese puppetry. This year's Myanmar delegate, Zun Thansin, has outdone her predecessor by "wearing" an enormous prop representing a traditional Burmese musical orchestra. If Thansin had thought that she could outdo Htun's costume and win for Myanmar again, well she had thought wrong. This year, the judges picked Japan whose costume had the biggest surprise element of all - a samurai outfit which doubles as a kimono! 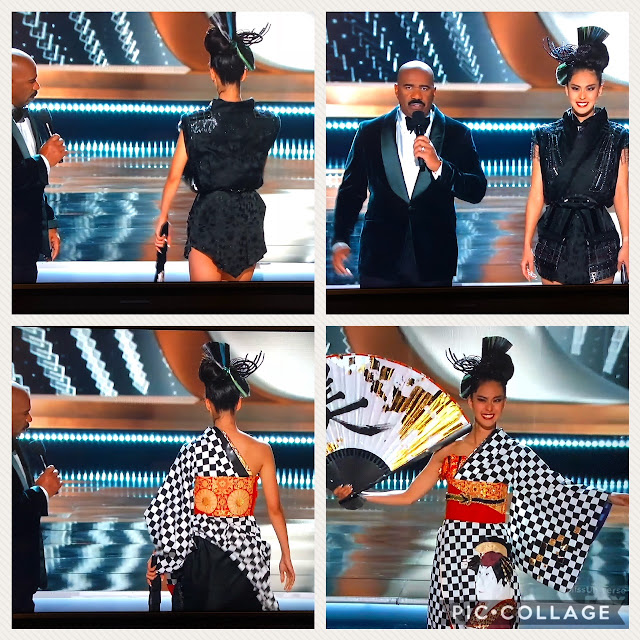 Usually, special awardees were announced during the telecast but MUO has scrapped this tradition over a decade ago. Now, the awardees are announced either during an après party or posted on social media, which I find tacky and undignified. This year, Miss Panama Laura de Sanctis was voted as Miss Congeniality. This is the second time that a Miss Photogenic award was not distributed (the first being in 2015) -  which is pathetic especially since there were so many girls that looked stunning in photographs. Is MUO really on a tight budget that they can't afford to splurge another $1,000 as prize cash for a Miss Photogenic? With the astronomical figure that they had paid Steve Harvey to host for the third time, $1,000 is peanuts.

Misses Thailand and Venezuela were eliminated after the Top 5 question round, which left Misses South Africa, Colombia and Jamaica at the Top 3. Don't you just love Colombia's infectious ecstatic reaction? 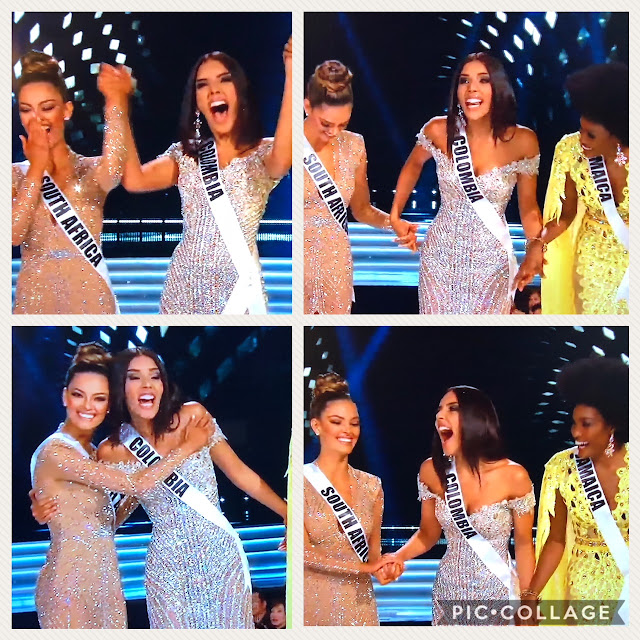 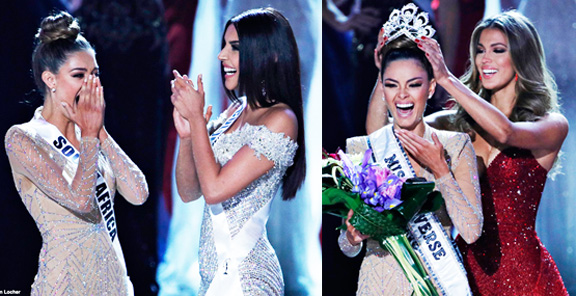 The opening number and the new selection format.  The stage is a repeat of the 2015 show when it was held at the same venue (AXIS) in Las Vegas. It had gigantic LED screens that featured the respective flags of each contestant. But the introduction is an almost repeat of last year's when the candidates did not get to introduce themselves. Instead, a feminine voice-over introduced each contestant - not alphabetically - but by region, which is reminiscent of the regional introductions that first began in the early 1990s. However, a new component was added:  the selection of top four scorers from each region (the Americas, Europe, Asia/Africa/Oceania) plus wild cards (the top four scorers regardless of the region). This new selection format sought to offer an equal and fair opportunity especially to countries that have never or rarely placed, but to me it reeked of political correctness. Why should the judges be compelled to advance a mediocre contestant just because her country has not done well in the last 40 or 50 years? I supposed the pageant's new owners, IMG, wishes to perpetuate the notion of global inclusion by telling the world that it is not okay to ignore countries with non-existent pageant tradition. 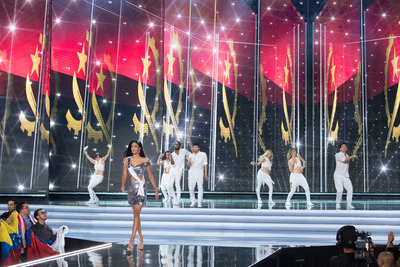 Las Vegas, baby. For the fifth time, the pageant was held in the City of Lights, Las Vegas. And for the second time at the AXIS. Critics claim that the only reason Las Vegas hosted the pageant again was that no other country would host it and/or that no country could afford the exorbitant hosting fees charged by MUO. So naturally, Las Vegas automatically became the default host city. Nothing wrong with that.  The city was designed to host all sorts of events, and it is fully equipped with everything that MUO needs to put on a good show. One major concern that was brought up by naysayers was that the city had been the target of a crazy gunman who had opened fire on a crowd of concertgoers at the Route 91 Harvest music festival on the Las Vegas Strip last October 1, killing 58 innocent people. What if a similar incident occurred at the Miss Universe pageant? It was a legitimate concern; however, MUO's security staff is one of the toughest in the pageant world. It is so tough that even national directors are prohibited from seeing or speaking to their delegates during the entire competition.
_________________________________

The swimsuit and evening gown presentations return to tradition. I guess this year MUO yielded to the demands of pageant fans who hated last year's presentations where the finalists had to come out in groups of three. This time, it was back to the 2015 format with the girls being introduced one by one, and thus giving each of them more airtime. In the swimsuit segment, the girls with the best bodies are Philippines, Ghana, USA, Colombia and South Africa, but Venezuela and Brazil ruled the catwalk. Thailand was the only one who opted to wear a one-piece (what was she hiding?) In the evening gown segment, Jamaica's bright and intricately designed yellow gown was a real showstopper and complimented her glowing ebony complexion. Philippines looked the sexiest in her sleeveless, crystal-studded light-blue gown with a plunging neckline and high slit which enhanced her ridiculously hot body. Although I don't particularly care for South Africa's long-sleeved nude gown, she did give the best stage projection with her exquisite face and killer smize! As commentator Lu Sierra would constantly stress, "It's all about the girl, the face, the eye contact." 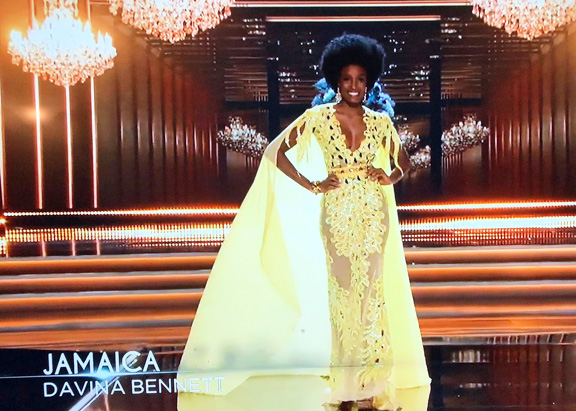 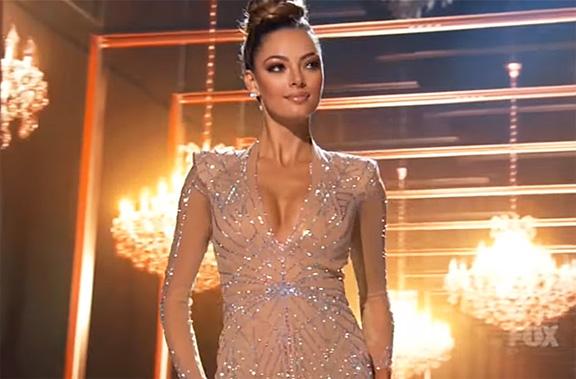 Miss-Matched / Separated At Birth? Did anyone notice the striking resemblance between Miss USA Kára McCullough (left) and Miss Brazil Monalysa Alcântara (right) especially during the swimsuit line-up? Matching hairdo, matching smile, matching leg stance, matching swimsuit. Imagine if they had been the last two standing finalists. Who do you think would have won? 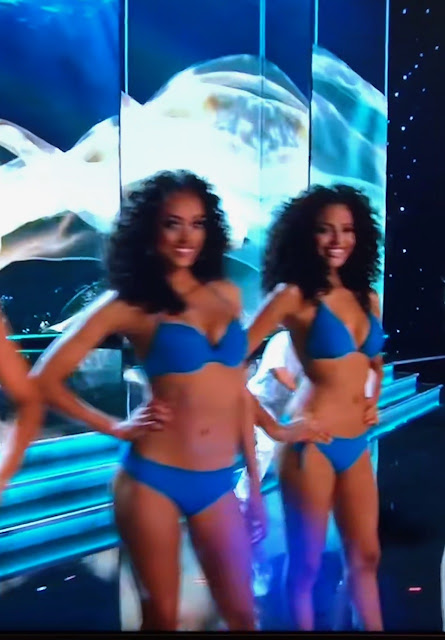 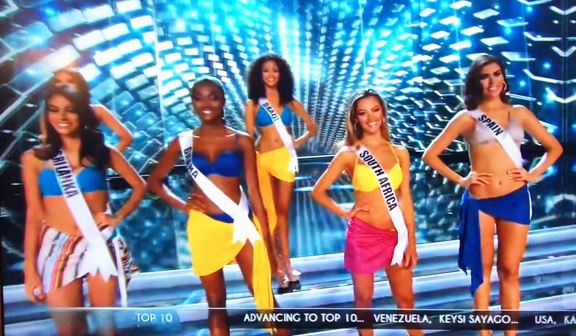 Surprises, surprises! Let's face it: it is rare for a pageant expert or fanatic to successfully predict which countries will make the cut, as every year there will always be one, two or more non-favorite countries that will always pull a surprise. This year, there were five: Croatia, Ireland, China and in the photo below, Sri Lanka (Christina Peiris) and Ghana (Ruth Quashie). Croatia has been  participating consistently since 1997 and so far has placed twice in the top 15 (2009, 2012); its representative, Shanaelle Petty, was nowhere on the list of favorites of most fans, as she was just as shocked as I was when her country was called. Ireland started competing in 1961 but has never won;  Cailín Áine Ní Toibín's top 16 placement is the first for Ireland since Rozanna Purcell's Top 6 position in 2010. Ruth Quashie gave Ghana its second Top 16 placement since 1999, whereas China also got its second since 2013. 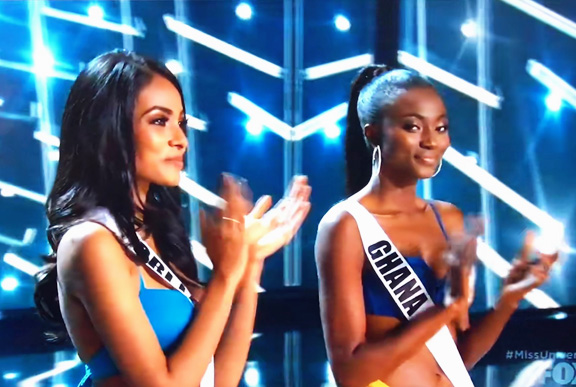 And speaking of China, let's appreciate her quasi-androgynous look: 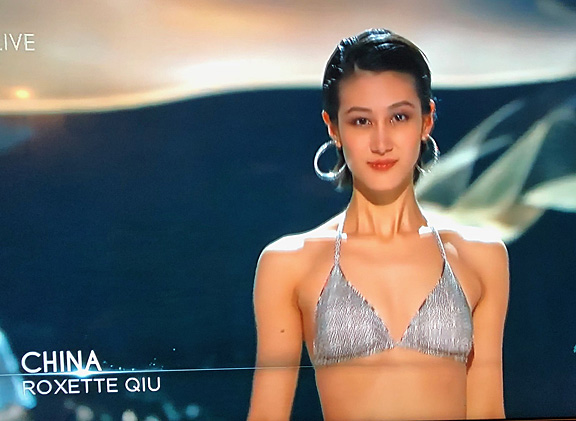 Wild card, wild fans. The Philippines has been placing consistently at Miss Universe since Venus Raj in 2010, and Rachel Peters was not about to break that streak. When her country was not called as a top scorer from the Asia/Africa/Oceania region, it caused much anxiety to her huge league of Filipino fans. Thank God this anxiety quickly turned to rambunctious tranquility when Rachel's country was called as the first wild card. 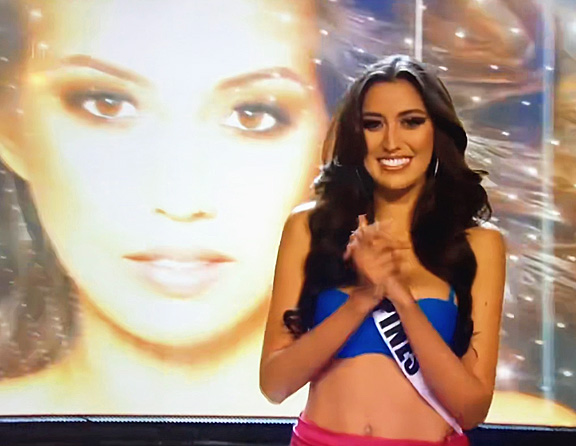 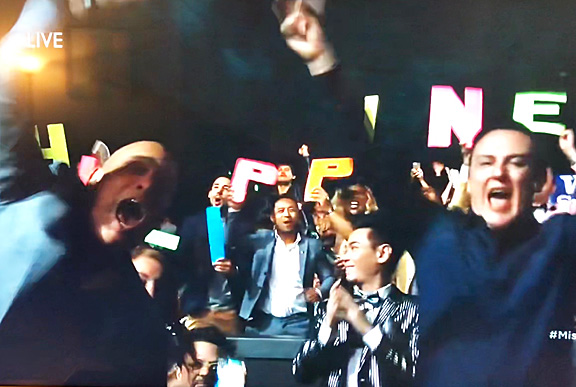 Filipino fans going wild when their country's rep made the cut. It's hard to imagine a Miss Universe pageant without wild, passionate and entertaining Filipino fans in the audience, as they add so much color and amusement to the show!

How do you solve a problem like Maria?  They say that your answer to the final question will either make you or break you. While the other four finalists aced their respective questions, Thailand's Maria Poonlertlarp struggled with her answer to this question, "What do you think has been the most important social movement of your generation and why?" Her response: "I think the most important social movement so far is that we’re having an aging population. So the most important movement in our time is definitely the youth. So the youth is the future, the youth is something we have to invest in because they’re the ones who are gonna look after the earth that we live in." For someone who used to teach English, Maria seemed unsure about what a social movement is. One could assume that she probably meant that society needs to care about old people and thus we need to encourage today's youth to look after the elderly. But something was lost in translation and overall her response sounded incoherent. Maria was actually my favorite for the crown and I was ecstatic to see her reach the top 5, but alas, she was not destined to win.
_______________________________

Fergie's performance. Wow! I have never seen a more heartfelt performance by a guest artist on a Miss Universe show until I witnessed Fergie's touching rendition of her latest hit, "A Little Work." Who wouldn't be touched by such profoundly spiritual and inspirational lyrics? 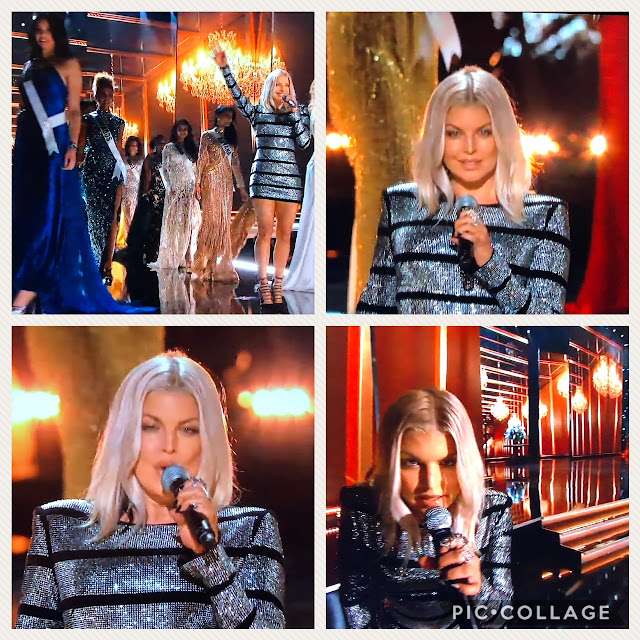 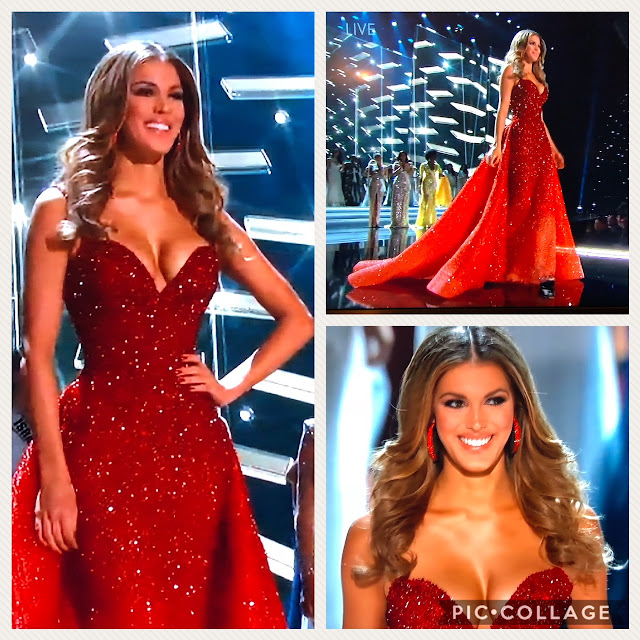 So from a scale of 1 to 10 (1 being the lowest and 10 being the highest), how would I rate the 2017 telecast? I would give it a 6. The production was dull as dishwasher, Steve Harvey's jokes have become stale, the new selection format was inordinate, and the girls continued to wear those ugly Chinese Laundry tippy toe shoes.