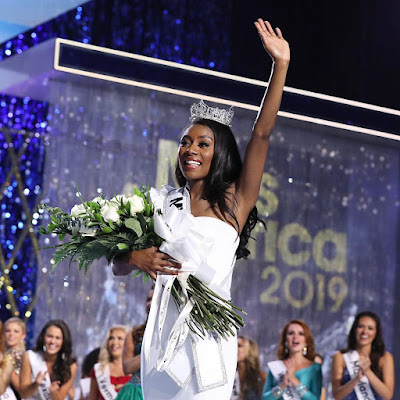 ATLANTIC CITY, N.J. — There they go. Miss America state groups in three more states have had their licenses revoked by the Miss America Organization following a bitter, high-stakes clash between state pageants and the national leadership headed by former Fox News host Gretchen Carlson.
The Miss America Organization sent termination letters Friday to New Jersey, New York and Florida. The Associated Press obtained two of the letters, and confirmed with leaders of the third state that it, too, had been revoked.
So far, the parent organization has sent termination letters to seven states, and leaders in an eighth state have resigned in protest.
The latest targets included the pageant’s current and traditional home — New Jersey, whose Boardwalk Hall hosts it each year in Atlantic City — and the state that has produced four of the last six Miss Americas (New York), including the current Miss America, Nia Imani Franklin.
Earlier this year, the Miss America Organization had moved against Georgia, West Virginia, Pennsylvania and Tennessee, while Colorado’s leaders quit.
The letter to Florida cites “the State Organization’s default under the Agreement,” but does not spell out what the violations were. The letter to New Jersey states that its agreement with the parent organization is not being renewed.
States whose licenses are terminated can request an appeal hearing within 10 days from Miss America’s executive committee. After an appeal is heard, the Miss America Organization has the right to seek a new licensee.
The Miss America Organization declined to discuss the shakeup. “The revocations are subject to a confidential appeal process and we are unable to comment on the status of the licensees or their leadership,” it said in a statement.
They would not say whether any of the targeted state leadership groups has been replaced.
The turmoil involves a revolt by dozens of states this summer against the national leadership of the pageant headed by Carlson.
State officials say their dissatisfaction stems not from this year’s elimination of swimsuits, but by the way Carlson and CEO Regina Hopper have run the organization since taking over in January. Their biggest change was dropping the swimsuit competition and focusing more on the contestants’ platforms and talents in an attempt to make the pageant more relevant.
But most state leadership groups chafed under the new national leaders, and even the outgoing Miss America, Cara Mund, released a remarkable letter in which she said she had been marginalized and bullied by top pageant leaders. An investigation commissioned by the Miss America Organization found no evidence to back up that claim, but investigators did not interview Mund for the report, which was issued on Sept. 10, the day after the 2018 pageant was held.
Source: The Washington Post, Dec. 5, 2018