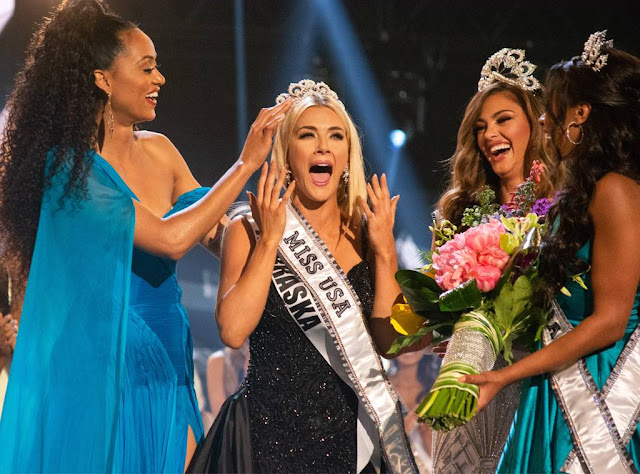 
It’s official. This year’s Miss USA pageant is coming to Reno after the Reno-Sparks Convention and Visitors Authority voted to approve $350,000 in special funding for the event on Thursday morning.

It is the first time that the event will be held in Reno. The Miss Universe Organization, which also oversees the Miss USA pageant, will now be moving forward quickly to prepare for the event.

The pageant is scheduled to be broadcast on Fox at 8 p.m. Eastern Standard Time on May 2 and will be held at the Grand Sierra Resort's Grand Theatre. "We have everyone on standby after this meeting today — all our state directors, family, friends — everyone is waiting for us to pull the trigger ... and make arrangements for coming here (to Reno)," said Paula Shugart, president of the Miss Universe Organization, at the RSCVA public meeting.

Funding will come out of the RSCVA’s budget, which is generated via room taxes from area hotels. Options for the RSCVA include its contingency fund, which still has $400,000 left for the fiscal year. The organization can also draw money from its marketing budget or its air service fund.

The board’s 7-2 vote was preceded by a robust debate among its members.

RSCVA Board Chairman Bob Lucey, who voted against the special funding, said he had “major concerns” about the amount involved, which he described as the highest figure that the organization has ever approved for a special event.

Lucey also questioned the timing of the event, which is scheduled to be held in just a little over a month.

“We’ve never addressed an ask of this size or magnitude nor have we ever put together a production of this size (with this little time left),” Lucey said. “Is this standard for you guys? Because for us, this is a little more unorthodox.”


Shugart admitted that it seems that the organization is cutting it close. If Reno were to reject the funding request, they would be forced to ask Fox to move the date of the event and negotiate with one of the previous pageant locations to hold the event this year.

At the same time, Shugart stressed that the organization knows what it needs to do to hold the event and can get things done quite quickly once a decision is made.

“This isn’t the norm but this does happen,” Shugart said. “I wouldn’t be here if we weren’t 100 percent convinced that we could do it."


Other board members also voiced concerns about whether hosting a pageant would actually hurt Reno’s image instead of enhance it. Reno has worked hard and spent a lot of money to improve its image and some in the board worried that the pageant could harm those efforts, particularly among people who consider such events as outdated or exploitative of women.

The concerns were backed by The Decker/Royal Agency and BVK, which do marketing work for the RSCVA. BVK, in particular, indicated that hosting the event was “not prudent at this time,” especially due to the negative press it might attract.

Hillary Schieve, RSCVA board member and Reno mayor, pushed back against the criticism of pageants, citing the positive experience that a couple of her female staffers experienced while taking part in them. Schieve also pointed out that Reno itself was in a similar situation in the past with regards to its image.

“Reno hasn’t always had the best brand either … and that’s a struggle that Reno knows a lot about,” Schieve said. “(Pageants) aren’t just about being a pretty face anymore — they have changed so much when it comes to education and confidence and being ambassadors not just around the country but all over the world.”


A majority of board members ultimately voted to approve the funding, citing the Miss USA pageant’s well-known brand, the resulting TV exposure and the event’s international reach.

The RSCVA held the special funding vote in response to a request by Miss USA parent company Endeavor — formerly known as William Morris Endeavor IMG — for incentives in order to make it feasible for the organization to hold the pageant in Reno. The request, which was first made at the RSCVA’s February public meeting, included assistance in the form of either tax breaks, a financial stipend, free hotel rooms for contestants, or a combination of the three. Last year, the organization received a $1 million tax break as well as a cash stipend between $300,000 to $400,000 when it held the Miss USA 2018 pageant in Shreveport, Louisiana, said Jonathan Seiden, legal counsel for Endeavor.

At the time, Seiden assured the RSCVA board that the return on investment for Reno-Tahoe would exceed the cost of the incentives.

Endeavor estimates that 4,000 to 5,000 visitors typically attend the Miss USA pageant, staying at the host cities for an average of five to six days. The Miss USA staff and crew alone spend more than $300,000 total and stay on site anywhere from two to three weeks. The Las Vegas pageant in 2017 generated more than 100 jobs over a three-week period, according to Endeavor. The 2015 show in Baton Rouge saw 5,150 room nights booked and generated more than $2.6 million in revenue for area hotels, the company claimed.


“This is not a handout,” Seiden said. “You’ll get a nice feature on prime time TV about the city and about the contestants leading to the event. (Viewers) will see downtown, your  mountains, your beautiful murals … and contestants talking about all the wonderful things you can do in the Reno-Tahoe area.”

While the pageant still garners an audience nationally, ratings have consistently declined over the years as viewing habits change and more people see the concept of pageants as being outdated. Back in 1979, for example, Miss USA viewership was at 38.1 million, according to ratings company Nielsen. In contrast, viewership numbers in the last five years have been lower.

The 2015 pageant saw an especially sharp decline — a record low for the event — after NBC and Univision dropped the pageant in response to then-owner Donald Trump’s comments criticizing Mexican immigrants. The 2015 pageant was broadcast by cable channel Reelz.

“Our fanbase shows up not just on TV but also on social media in many different ways,” Seiden said. “The audience is still there and could be bigger but they’re just in different places.”

Seiden also touted the event as a strong performer on the international scene. The event generates more than 100 million impressions globally and digital exposure worth $1.5 million, according to Endeavor.


“(Miss USA is) distributed to over 70 countries in the world,” Seiden said. “When we highlight Reno-Tahoe, it won’t be just for the United States but for an international audience who maybe doesn’t know much about the area and may want to come visit.”