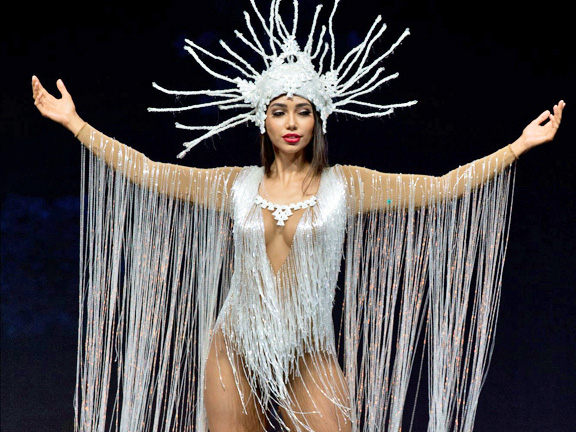 Bolivian model Joyce Prado, 22, has lost her Miss Bolivia Universe title after becoming pregnant during her reign. Yahoo! reports that Prado may have been stripped of her title because of pageant rules prohibiting pregnancy.
On Friday, the Bolivian modeling agency Promociones Gloria announced on Facebook that Prado, who had won the group's Miss Bolivia and Miss Santa Cruz pageants in 2018, was dismissed from her role as result of a "breach of contract."
"Promociones Gloria is announcing to Opinion Publica that the current Miss Santa Cruz and Miss Bolivia Universe 2018 has been stripped of her titles of Miss Santa Cruz and Miss Bolivia for reasons strictly related to a breach of contract, noting that we maintain cordial relations in an area of mutual understanding, honoring the confidentiality clause," the modeling agency wrote on Facebook.
While the modeling agency did not explicitly describe the nature of Prado's breach to safeguard a "confidentiality clause," Promociones Gloria did share more information on Instagram.
On Saturday, the agency shared a photo of an El Día Digital newspaper headline which read, "Joyce Prado is left without a crown because of her pregnancy."
In an interview with El Día Digital, Tatiana Limpias, an executive at Promociones Gloria, said the agency has "a five-year contract with Joyce," and that she "will remain in the ranks of the agency as a model."