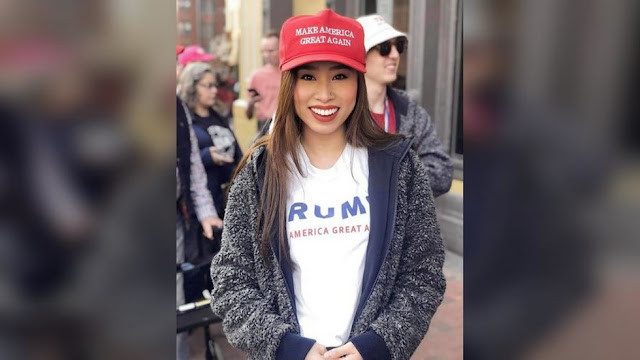 Ardent Trump supporter Kathy Zhu has said she was stripped of a Miss World America title after the organizers took issue with her black-on-black violence tweet and her refusal to try on a hijab as part of a school activity.

Prominent conservative commentator Kathy Zhu, known as Political Kathy on Twitter, posted a screenshot of an email by state director of the Miss World America beauty pageant for Michigan, Laurie DeJack, notifying her that she must dissociate herself from the  due to “offensive, insensitive and inappropriate content” found on her social media.
DeJack said that the MWA no longer recognizes her as a “participant of any sort or in any capacity” and demanded she removes all the mentions of her taking part in the pageant.
Zhu also posted screenshots of her lengthy text-message exchange with DeJack, in which she informs Zhu that there has been a “huge issue” with her, without providing any details. As Zhu pressed DeJack for more information, the director cited a 2016 tweet by Zhu, reading: “Did you know that the majority of black deaths are caused by other blacks?  problems within you own community before blaming others.”
DeJack did not explicitly accuse Zhu of racism, but the Chinese-American student said that she would “stop by” her house and “give back the crown/sash” that she was awarded as the  of the local Miss Michigan pageant, before lashing at DeJack for implying that the “statistics” she cited were somehow racially biased.

This is ridiculous and to work with someone that thinks statistics is racist is the last thing I want to do.

“I’m completely hurt over this but I hope you find a better candidate that will advocate for brainless ideals like ‘world peace,’” Zhu added.
While there is no mention of a “hijab scandal” in the screenshot Zhu provided, the conservative commentator claimed that it was one of the reasons she got her crown taken from her.
Zhu, then a student of the University of Central Florida, made headlines in February last year after she refused to participate in a “Try a Hijab” campus event to mark World Hijab Day.
At the time, Zhu took heat on Twitter for her unwillingness to try on the conservative Muslim garment, which she called a “scarf of oppression.”
SOURCE: RT.COM, 7/20/2019