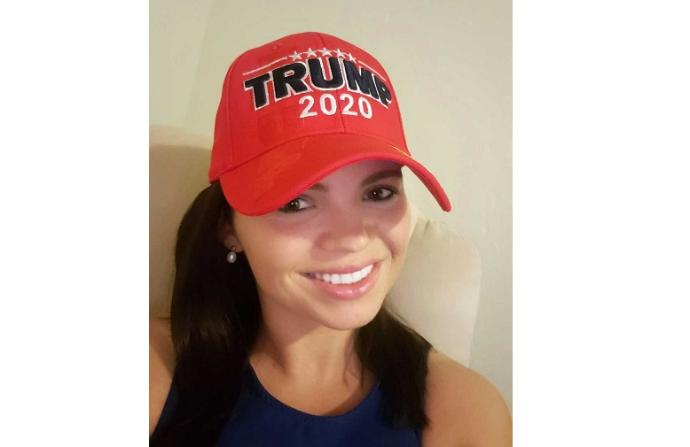 She's a US combat veteran, holds the rank of Sergeant First Class in the US Army National Guard, and is a Trump supporter. Until Sunday, she also was the current Ms. Nevada State set to compete in the Ms. America Pageant this weekend. But Katie Jo Williams says after she refused to clear her personal social media of all things political, including her support for President Trump, she was stripped of her title.
"I was officially disqualified from competing in the Ms. America pageant for 2019," said Williams in an Instagram video. She says organizers told her she was "too political" to be involved.
So what did pageant organizers deem "too political"?  According to Summit News, the director of the pageant sent screenshots to Williams showing which pictures she needed to delete. They included pictures of her wearing a  hat, as well as photos of her professing her love for America, and her opposition to Antifa. She says the director's message made it clear these pictures all needed to be erased.
Yet earlier, Ms. America Pageant CEO Susan Jeske appeared to show  for Williams' social media posts.  A Facebook conversation posted to The Gateway Pundit between Jeske and Williams reveals that Jeske encouraged Williams to have a photo taken of herself wearing her Ms. Nevada State sash, standing beside President Trump and Donald Trump, Jr. at an upcoming Turning Point USA conference that was held in Washington in July.
Despite that support, on Sunday Williams was asked to remove her posts. After she refused, her pageant title was taken from her.  According to Williams, in addition, organizers then told her that in order to get a refund for her entry fee, she would have to send back her Ms. Nevada State sash and crown and agree not to discuss her removal from the competition with anyone.
"The pageant's actually this Saturday," she said in the video she posted to Instagram Monday night. "So, that means everything's been paid for. Everything's been done. All the sponsor money has been collected, and now I don't get to compete."
According to The Gateway Pundit, Williams believes it's not her views, but her conservative views that got her canned.
"I feel like if I have more liberal views and less conservative views then this wouldn't even be an issue," she explained. She (Jeske) assured me that that was not the case. And yet as soon as I turn around there are posts about the Human Rights Campaign, which are great. I'm all for the Human Rights Campaign. But for them to not say anything about that and then for them to criticize me for supporting my sitting president? I couldn't even believe it."
The Human Rights Campaign is a group that lobbies for LGBTQ issues.
This is not the first time a beauty queen has been stripped of her crown for her political views.  CBN News reported in July about Kathy Zhu, who was competing as Miss Michigan in the Miss World America .  Zhu claimed she lost her title because of discrimination against her conservative views.
Zhu received a letter from Miss World America (MWA) stating that several social media posts contained offensive, insensitive and inappropriate content. Zhu posted on her Twitter page that the pageant director accused her of being "racist, Islamophobic, and insensitive."
Apparently most concerning to the MWA was Zhu's tweet about refusing to wear an Islamic headscarf after a Muslim woman tried to 'forcibly' put a hijab on her head during World Hijab Day at her college campus in 2018.
Townhall.com reported Zhu argued that the Islamic headscarf is used to oppress women in certain Muslim countries, saying, "There is a 'try a hijab on' booth at my college campus. So you're telling me that it's now just a fashion accessory and not a religious thing? Or are you just trying to get women used to being oppressed under Islam?"
MWA also took issue when Zhu tweeted, "Did you know the majority of black deaths are caused by other blacks?  problems within your own community before blaming others," according to the Detroit Free Press.
Williams is baffled by what has happened to her.  But losing her title and the chance to compete in this weekend's Ms. America contest has not shut her up.
"I am so tired of being labeled as this crazy, right-wing, whatever you want to call it," she said. "I just don't understand how you could censor someone with conservative values when I'm not even really saying anything that's bad."
Source: CBN.com, 8/20/2019


There are two sides to every story.
READ "IN RESPONSE TO KATIE WILLIAMS ACCUSATIONS" by the MS. AMERICA PAGEANT