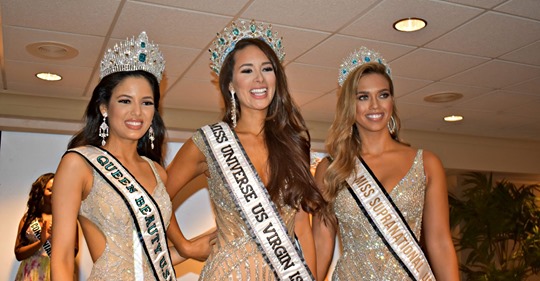 Andrea Piecuch, center, will represent the US Virgin Islands in the next edition of
Miss Universe whose date and venue have not yet been confirmed.


ST. CROIX — Six of the ten contestants who participated in Sunday evening’s Miss Universe U.S. Virgin Islands were women from outside the USVI, most with no known  to the territory and some of whom had participated in other pageants just months prior. The competition, held in a banquet  at the Divi Carina Bay Casino, was the qualifying event whose  will represent the U.S. Virgin Islands on the world’s biggest and most prominent pageantry stage: Miss Universe.


But what was a relatively engaged audience turned somewhat raucous when not one of the four local young women who represented their home, the USVI, was chosen by the judges — non of whom were local — as part of the top five finalists. The mood in the room went from cheerful to cheerless, and when the last of the top 5 was called, dismay gripped the crowd and things started to get unruly.

The displeasure among Virgin Islanders was rife. Inside and outside the banquet room, they spoke of the pageant’s results as a disgrace to the territory, with some calling the event fraudulent. One particular scene cut deep among some locals: as the top five finalists were called forward, the local girls remained at the back. A local individual told the Consortium that the scene brought her back to a grisly moment of her youth when she was raped.
Later, a commotion broke out between the event’s official photographer and some attendees.
At the heart of the chagrin was the fact that the Miss Universe U.S. Virgin Islands winner, Andrea Piecuch, who moved to St. Thomas a few months ago to meet the 6-month residency requirement of the competition, had no known ties to the territory. It was only January that Ms. Piecuch participated in the Miss Utah USA 2019, where she placed third. The year before, she participated in Miss Florida USA.

Additionally, the website of one of the runner-ups in the top five, Destani Noel Huffman-Jefferson, says she is a native of Richmond, Washington but lives in DC. This puts in question whether Ms. Huffman-Jefferson met the residency requirement to participate in the competition as per its criteria.

Miss Universe is owned by WME/IMG. The agency purchased the organization from current U.S. President Donald Trump, back in 2015. According to Lulu Orange Tyson, the local director of the competition, WME/IMG changed the rules so that any individual living in a certain region can compete in any of the region’s Miss Universe competitions — provided that the competitor meets the participation criteria, which includes six months of living in the jurisdiction where the competition is being held, or enrolling in this jurisdiction’s university.
Ms. Tyson said the winner, Ms. Piecuch, met the residency requirement. She also said that some of the other participants were enrolled at the University of the Virgin Islands, a criteria that does not include a duration.

The requirements to participate shocked some at last evening’s pageant, as it allows persons with no intimate connection to the U.S. Virgin Islands to compete.

Janeisha John, a Virgin Islander who participated and won the Miss Universe U.S. Virgin Islands in 2010, expressed her dissatisfaction with this year’s pageant outcome.

“I have to say that this is absolutely absurd and unacceptable!!! I’m all for a great competition and good sportsmanship but WHO ARE THESE WOMEN that you guys have appointed to represent our TERRITORY?!?!” Ms. John wrote on her Facebook page.

“Most of these women have no real ties to the USVI, they’ve competed for various pageants outside of the USVI. The winner Andrea just competed for Miss UTAH USA on January 26th of THIS YEAR, and Miss Florida USA just last year. How is she even a resident?! and NO a WAPA bill in your name does not make someone qualified enough to represent an entire territory or community of people. Quite frankly many of these women are simply seeking an easy way in to compete at the Miss Universe pageant, due to our smaller preliminary competition size and simpler entry process. This is unfair and distracts from choosing representatives who are deeply rooted, and invested in our culture, our people, our territory!” she wrote.

She added, “How can you honestly expect to have the full support and love of our people, or to get strong local contestants if they feel like they can’t trust your organization?! This is an opportunity for our queen to wear our VI PRIDE on that Miss Universe stage, how can someone who’s not from the VI genuinely do that for us?! It’s not about just sending any pageant girl, it’s about sending someone that represents US, that little girls in the Virgin Islands can relate to and see themselves being one day. It’s about having someone truly shine a light on our territory, our people, our culture, our islands! This really has to be addressed!!!!!”

As the pageant came to a close, the USVI Department of Tourism was announced as a platform sponsor of the competition.