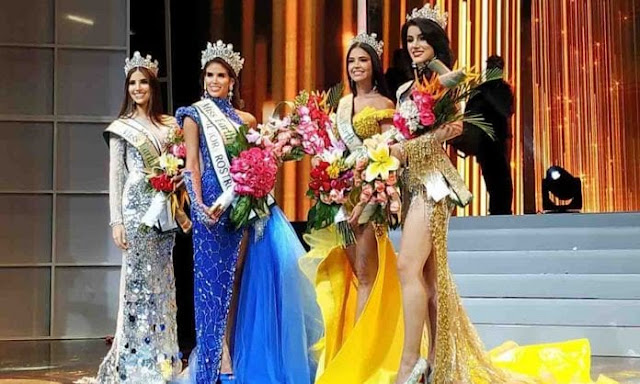 Michell Castellanos (above, second from left), 24, representing the state of Guarico, was crowned Miss Earth Venezuela 2019 last August 25. She will now represent Venezuela in the 2019 Miss Earth pageant to be held in the Philippines in October.

Castellanos's victory was marred with scandal as the majority of the contestants walked off the stage and refused to congratulate her. According to this Spanish-language article  two contestants - Ly Casanova (Miss Costa Oriental) and Andrea Cesin (Miss Monagas) -  came out to the press and accused Castellanos of taking too many liberties, like for example, arriving late at certain events whereas the rest of the girls were always punctual. They also said that the other girls who share their sentiment were afraid to speak up due to threats that they have received. Also, the representatives of Navicu, a major sponsor, were also part of the jury and they stated that their choices did not match those that were read by the announcer. They also said that Stephany Zreik, Miss Miranda who was crowned Miss Earth Fire, is the girlfriend of the president of Navicu. And according to some Venezuelan missosologists, it looks like Prince Julio Cesar, the president of Miss Earth Venezuela, has engaged in fraudulent activities and they have stopped supporting the pageant.

WATCH THE CROWNING MOMENT & THE WALK OUT