Phyllis George, the former Miss America who became a female sportscasting pioneer on CBS's “The NFL Today” and served as the first lady of Kentucky, has died. She was 70.

A family spokeswoman said George died Thursday at a Lexington, Kentucky, hospital after a long fight with a blood disorder. Her children, Lincoln Tyler George Brown and CNN White House correspondent Pamela Ashley Brown, released a joint statement, saying:
“For many, Mom was known by her incredible accomplishments as the pioneering female sportscaster, 50th Miss America and first lady. But this was all before we were born and never how we viewed Mom. To us, she was the most incredible mother we could ever ask for, and it is all of the defining qualities the public never saw, especially against the winds of adversity, that symbolize how extraordinary she is more than anything else. The beauty so many recognized on the outside was a mere fraction of her internal beauty, only to be outdone by an unwavering spirit that allowed her to persevere against all the odds.”
Miss America in 1971, George joined Brent Musburger and Irv Cross in 1975 on “The NFL Today.” Jimmy “The Greek” Snyder later was added to the cast.
“Phyllis George was special. Her smile lit up millions of homes for the NFL Today," Musburger tweeted. “Phyllis didn't receive nearly enough credit for opening the sports broadcasting door for the dozens of talented women who took her lead and soared.”
George spent three seasons on the live pregame show, returned in 1980 and left in 1983, winning plaudits for her warmth of her interviews with star athletes. She also covered horse racing, hosted the entertainment show “People” and co-anchored the “CBS Morning News.”
George was briefly married to Hollywood producer Robert Evans in the mid-1970s and to John Y. Brown Jr. from 1979-98. Brown owned Kentucky Fried Chicken and the NBA’s Boston Celtics and served as the governor of Kentucky. 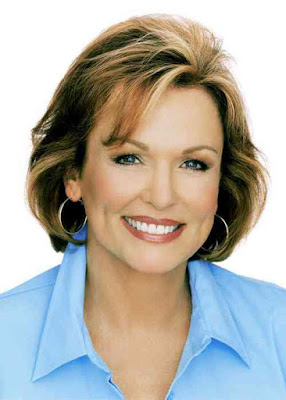 “Phyllis was a great asset to Kentucky,” Brown told the Louisville Courier-Journal. “We had a great partnership. I think we enjoyed every single day.”
From Denton, Texas, George attended the University of North Texas for three years, then went to Texas Christian University after earning a scholarship as Miss Texas in 1970. In her 2002 memoir, George wrote that a male friend told her sportscasting wouldn’t work because it was a man’s job. George even acknowledged knowing nothing about the industry and having no experience nor another female mentor to follow.
None of it stopped her.
George was a friend of minister Norman Vincent Peale and a devout believer in his best-selling philosophy of positive thinking, George credits that approach for launching a defining career she didn’t expect — one that saw her range into an astonishing variety of ventures and roles, in media, the film industry, food and beauty products, and as the glamorous first lady of the bluegrass state.
“Saying yes to yourself opens up opportunities that can take you anywhere,” George wrote. “Having a mentor in your life who says yes to you is also key. Appreciate your mentors when you’re starting out. And later, always give credit to the people who were there with you at the beginning.”
She entered a highly competitive pageant and emerged as Miss America,” Pitino wrote. “She became the first national female sports broadcaster. She flourished in the limelight as First Lady in the state of Kentucky. She’s been successful in business. And she is a respected humanitarian. Each step along the way, she embraced the mission at hand.”
Source: Fox News, 5/16/2020