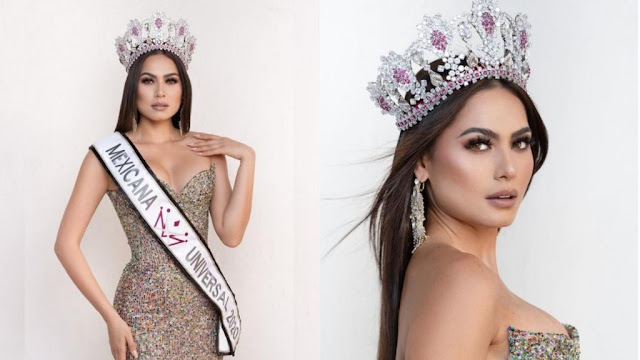 Neither the complaints of Sofia Aragon and other former contestants of beauty contestants, nor Lupita Jones’ own response to the whistleblowers -for which he apologized shortly after-, prevented the Mexicana Universal 2020 final from taking place this Sunday through Imagen TV.

There, the contestants from different states of the Republic faced a qualifying that consisted of several stages, such as walkways and rounds of questions and answers where the contestants’ position was sought on issues such as social media, empowerment, education and beauty competitions.

As expected after the conflict between Lupita and Sofia Aragón – the former winner of Mexicana Universal – the model who gave the crown to the new selected who will represent Mexico in Miss Universe was her alternate, Claudia Lozano, who before delivering the new crown to Andrea Meza (Chihuahua), said a few words in favor of the contest.

“ I want to thank the organization and all the girls who are here celebrating their dream that they have encouraged to enter such an interesting platform, they will remember it for helping them to be the women they are now,” he said.

Reina Hispanoamericana 2019 representative Regina Peredo also came to the Imagen stage, who, crying, applauded the work they do in the contest.

“ I wanted to give you a message with a lot of love and affection, a year and a half ago they gave me the opportunity to represent Mexico in Bolivia (cry), is that a thank you is not enough, and for me Mexican Universal means so much, tonight I want to thank Lupita, Jorge, my family, and I want to tell you that I feel very peaceful and very proud of the great work we have managed to make a team, because this in the end is a teamwork that has to be recognized.” He added that Mexicana Universal gave her self-confidence, and gave her crown to the new Hispanic American Queen 2021, Andrea Bazarte, who will be the Mexican representative in Bolivia.

Another winner last year that came to the event was Yuridia Durán, Miss Charm 2020, who prior to delivering the crown to Karen Bustos (San Luis Potosi), Miss Charm 2021, said.

“ This has been a very enriching path for me, definitely, the Mexicana Universal platform has changed my life, I dreamed about this all my life and last year, being on this stage representing my state Nayarit was something that filled me with a lot of pride, I know that I have a long way ahead, the next year we will be representing Mexico at Miss International in Japan, so we have to keep preparing”

The representative of the state of Oaxaca, Angeles Castro, was also crowned at night as Latin American Universal.

Mexicana Universal’s third place went to Camila Canto, from Puebla; second place went to Brenda Smith, from Mexico City, and the alternate was Deborah Hallal, from Sinaloa, who now holds the same position as Claudia Lozano, entrusted to hand over the crown to the new winner after the absence of Sofia Aragon.

Before the name of the top winner of the night was released, Monica Noguera, one of the hosts of the event, said a few words in favor of Lupita.

“ I want to tell Lupita that it is a pleasure not only to be part of this event, to conduct this event, but to be next to a woman who has done as much for so many years as a warrior for these women, for these teenagers, that you have formed a wonderful spectacular discipline that many times obviously we need, and thank you for this opportunity Lupita dear.”

“ It has been an honor, a great pleasure and a great pleasure to share this month with all of you, we have worked more than a year because this is not done overnight and being able to accompany them, a bit of your life, sharing this experience, always enriches me also very much, I trust that these results will give you give Mexico the triumph it deserves, that Andrea, you are going to have a great responsibility, you have the dreams of 29 companions who have been with you also fighting for the same.”

On November 16, Sofia Aragón, representative of Mexicana Universal 2019, made a live broadcast in which he denounced the symbolic violence that Lupita Jones experienced when she contested, as she said, unlike other contestants she was not supported economically, even with housing or service. doctor on the part of the organization, as well as other situations.

The next day of her complaint, Lupita Jones made a live broadcast where she appeared with her work team and new contestants talking not only about Sofia, but ensuring that she knew what foot each of those who had passed through her organization was limping on.
“I know where they all come from and what foot they’re on, from the drug addict, the alcoholic,” said the director. In the same transmission he talked about the case of Sofia Aragon and the traumas with which he arrived at his office. “Sofia came tearing her veins, dragged, without bathing to the office.”
The next day, he made another video in which he apologized for showing herself as “an aggressive, violent, compassion and lacking sorority woman” towards the women who have integrated her contest.

Since then, testimonies have come out from other former contestants who have talked about the atmosphere at the event, including Cynthia de la Vega and Denisse Franco.

Shortly before the competition, Sofia shared a statement signed by former beauty queens (without specifying the names), asking to “raise our voice and unite so that we stop this kind of abuses.”