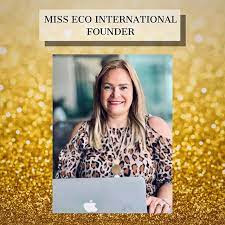 Less than 48 hours after the coronation of South Africa's Gizzelle Uys as Miss Eco International 2020 in Egypt, the news broke out on social media claiming that several of the contestants have contracted COVID-19.

Apparently, the pageant owner herself Dr. Amaal Rezk is also positive but didn’t tell anyone about it. Now these contestants are crying foul because they feel that the organization has abandoned them, and that they have to stay in Egypt indefinitely and pay for their own accommodations. When I was watching the live stream of the pageant, I did notice that not too many people in the audience were wearing mask or following social distancing. This is so revolting and irresponsible of the organization not to follow safety guidelines and be transparent about the situation.

Jessica Newton, the national director of Peru for Miss Eco International, is getting tremendous backlash specially from angry Filipino fans after she posted the Covid-positive test result of Miss Eco Philippines Kelley Day on her Instagram story. She shouldn’t have done this because it’s a private information. How would she feel if someone had posted her medical history online? I wonder how in the world did Jessica have access to the test result? According to Newton, Dr. Rezk and her daughter have flown out of the host city with the winner, Gizzelle Uys, and are nowhere to be found.

Also, on her latest IG story, she posted that the Miss Peru Organization will no longer send representatives to the pageant after the abuse and mistreatment that the candidates received from the organizers.     Meanwhile, MEI organization released a statement claiming that they “will ensure the safety of all our candidates.” Newton copied and pasted the statement on her IG story and superimposed the word “Falso” which is “false” in Spanish. I agree with Jessica. The statement is a pathetic attempt to fix the damage that has been done and will never be repaired.     The bottom line is that Miss Eco International should NOT have held a physical pageant if they couldn’t guarantee the safety of all participants (including the staff and visitors), and that the national directors should NOT have sent their representatives without the assurance of safety. Bravo to the national directors who were wise enough not to send representatives this time.     MEI organization should be ashamed for their gross negligence in causing foreseeable grave harm to anyone who attended the pageant. We can only hope that anyone who tested positive will take all the necessary steps to fully recover from the virus.

Nawat Itsaragrisil, the CEO of Miss Grand International as well as Thailand's director at Miss Eco International, did a live talk with condemning MEIO's negligent action. You can see the details of the talk on the Instagram page of Ko Phanasa, an independent Thai pageant journalist. According to Ko's postings, several countries have dropped the franchise including Thailand, that MEIO and Miss World Philippines organization (Miss Eco Philippines Kelley Day's director) already knew that Day has been infected with Covid-19 up until the finals but was allowed by Dr. Rezk to compete anyway.

This news is still ongoing as new details come in. Follow Ko Phonasa's Instagram for updates at @kophanasa