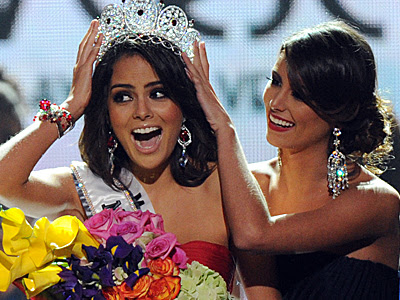 There CHI is... Miss Universe?

By Armin Amari for Critical Beauty


A TAD TEPID FOR MARIACHI? - Mexican culture is full of life and flair. From their food to their music, Mexicans have a zest for fiestas anywhere they go. However, I honestly found Navarrete far from zesty during the telecast. She decided to sport nude make-up, which completely washed her out on stage and while I do think she is facially attractive, I found her no match for Miss South Africa, Nicole Flint, or Miss Ireland, Rozanna Purcell, who are both facially more stunning and memorable. In swimsuit, Navarrete looked on the shorter side and her evening gown looked like something one could find in the clearance section of Sherri Hill's website. However, the most disheartening moment was Navarette's reaction to winning. Although she initially held her hands up to her face in disbelief, she did not look overwhelmingly excited or elated. This was one point in the show where I wish we had seen an element of Miss America, since no one can beat their winning reactions. As a matter of fact, Ximena's national director and former Miss Universe 1991, Lupita Jones, reacted much more emotionally to the final results, which I enjoyed watching more than the happenings on stage:

Overall, I would rate this year's Miss Universe telecast a 3/10 and that is generous considering I will be having nightmares of break dancing Elvis muppets styling their plastic hair with CHI products for months!