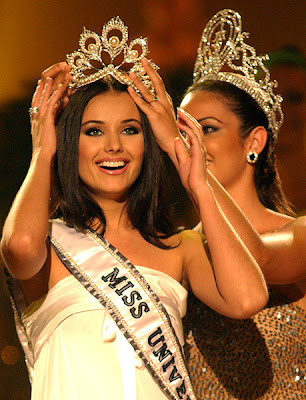 Apart from Yue-Sai Kan and Marisol Malaret, all the other judges have permanent residency in the United States. I believe that geography was the last thing on the judges' mind when they selected the Top Ten. I am utterly convinced that they looked into beauty without boundary - the kind that surpasses all hindrance to appreciating beauty at its best. This means that Oxana possessed qualities with which each judge could identify: Amir probably adored Oxana's flowing strapless Gucci gown, Patitz and Malaret loved Oxana's great catwalk, Tyrese and McDonald appreciated Oxana's earthiness, Kan cherished Oxana's money-making potential, and Zohn and Mendez identified with Oxana's "amazing survival skills". Gone are the on-screen displays of the individual judges' scores; instead, the delegate's score for each category was gradually flashed on a long, rectangular colored section on stage that also served as the catwalk area. We will never know which judges voted for which candidate - unless they speak out in public. We do know, however, that there were several surprises from the evening, such as Cyprus and Albania (a first-timer) and the tragic exclusion of earlier favorites Colombia and the Dominican Republic. Below is a chart showing the judges' collective scores for each semifinalist in two categories:

JUST LOOKING at the average scores above will tell us how the semifinalists fared after the evening gown competition: Russia came first with Venezuela trailing behind, whereas Germany and Cyprus were running neck and neck. The judges were either too conservative or too stingy with their scores, but they were quite generous with Oxana who received high 9s - clearly the mostly favored to win.

China's Ling Zhuo (photo right) proved to be the darling of the audience; she deserves credit for not having used an interpreter and still succeeded in charming the audience with her wit and effervescence ("Look meeee...!") Clearly, Ling was the most personable girl of the bunch. Panama's Justine Pasek should also be commended for her remarkable sincerity and diplomacy. When asked which country she would represent if she had to enter another pageant, Justine replied without the least hesitation, "Puerto Rico!" Her reply is reminiscent of Barbara Palacios who thrilled the Panamanian audience with her "Mi nombre es Panamá" rhetoric that helped her win the crown in 1986. Compare Justine's response with that of South Africa's Vanessa Carreira who looked incredible until she opened her mouth (she needs to take an intensive course on enunciation - now I wonder how she passed the preliminary interview!). And even though Venezuela's English was very good, she hardly answered the question, "What is the mo st important thing you've learned about participating in Miss Universe?" Instead, she gave a rather mundane and non-memorable response.

WHO SAID that the show was perfect? Certainly not I. The work of a critic is never done until he engages in nit-picking. So here are a few of my cynical comments:

OVERALL, this year's production was far superior to last year's, thanks to an incredible staff that consisted of director Ron de Moraes (who recently directed the Celine Dion television special on CBS last April 7th), writer Eugene Pack, award-winning production designers John Shaffner and Joe Stewart, art director Tina Miller, and of course, Richard Guy and Rex Holt of GuyRex fame who were hired this year to train the girls how to move and walk. The show will forever be remembered for Oxana's presentation; without her, there would not have been a show.

***Four months after her reign, Oxana Fedorova was dethroned and was replaced by her first runner-up, Justine Pasek of Panama (below): 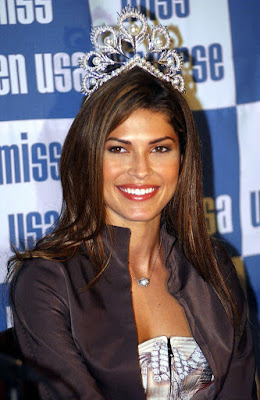