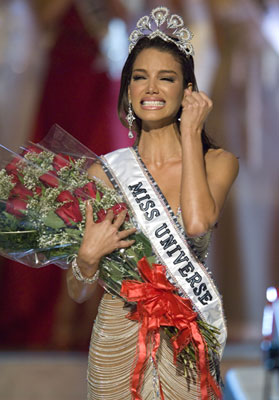 
The top ten finalists consisted of the delegates from Canada, Bolivia, Mexico, Colombia and Trinidad & Tobago. The remaining top twenty included the representatives from Denmark, Ethiopia, Russia, Brazil, Sweden, Thailand, Hungary, India, Argentina, and the Ukraine. Special awards were given to Lia Andrea Ramos of the Philippines for bringing her country's sixth Miss Photogenic award; to Angela Asare of Ghana for Miss Congeniality; and to Kurara Chibana of Japan for the Best National Costume.
BLAND STAGE, BLAND CHOREOGRAPHY : Let's get to the nitty-gritty. The stage was not as colorful or attractive as last year's in Bangkok; it was big, but not big enough to prevent the girls from running into each other while doing the segment in identical Tadashi dresses. The choreography - if ever there was one - was utterly abysmal. Gone are the days of the contestants truly entertaining the audience with cheerful songs and challenging dance moves. In an attempt to diversify the musical performances, MUO also hired opera singer Vittorio Grigolo and Puerto Rican singer Chelo. But neither performer proved memorable, really. There was no hint of Americana on stage at all, much less of Los Angeles. Had it not been for the voiceover announcing the name of the venue, one would have guessed that it was taking place in any American city with a similar stadium.
BIG UPSETS, BIG SURPRISES : What happened to Miss Australia Erin McNaught whose name was found virtually on everyone's top 20 list? Did her pre-pageant nude pictorials hurt her chances? What about big-time favorite Miss Mexico Priscila Perales? Did her attempt to look like Natalie Glebova or her compatriots' boisterous behavior ticked off the judges? Where were luscious Miss Sri Lanka Jacqueline Fernandez and celestial Miss Indonesia Nadine Chandrawinata? And what became of the equally beautiful and strong delegates from Peru, Poland, and St. Lucia - - all of whom had been included in nearly every fan's wish list? Even though these beauties were excluded, it was nevertheless quite comforting to see a few countries that have not entered the semifinals for quite a while such as Argentina (since 1979), Denmark (since 1967), and Sweden (since 1997). More excitingly, two countries scored in the semifinals for the first time: Ethiopia and Hungary.
MISS VOTE-O-GENIC : For the second consecutive year, the Philippines won the most coveted special award, the Miss Photogenic award. Actually, the only pageant fans who seemed to covet this award were the Filipinos themselves who mobilized each other all over the world to vote for Miss Philippines Lia Andrea Ramos via the Internet. The result is historical, and hysterical. The country now has the most number of Miss Photogenic winners (6), and ties with Colombia for the most number of awards overall (8). One can't blame the Filipinos for voting for their delegate; after all, there is power in numbers. In years past, the winners were selected by professional photographers; nowadays, the winners are selected by Internet users who must register their personal information first (name, address, birthdate, e-mail address) before submitting their votes. The winner for this award has become so predictable every year that it has lost its mystery and significance, not to mention that the Internet voting system mocks the judging system reserved to professional photographers.


I am sure MUO has received tons of e-mails from fans who have suggested that a new award - Miss Internet - should be added just for the fans to vote for, but even this award would probably be won by the Philippines anyway, unless the Chinese and the Indians take the challenge of voting for their own respective candidate. If the Filipinos truly want their third Miss Universe, they would be better off training their girls at home rather than abroad. Ever since Filipina beauties started training in Colombia in 2002, they have had nothing but bad luck - which stresses the popular notion among Filipino fans that Colombians purposely sabotage the winning chances of Miss Philippines.

WE LOVE THE SAMURAI QUEEN : I attended a Miss Universe party (no, not in Los Angeles) but in Boston at the new residence of my dear friends Steve Mocanu and Harrison Gonzalez. Four other guests (three of whom had never seen a Miss Universe telecast) had been invited including Maria Lekkakos, Miss Massachusetts USA 2004, a former rival of Shandi Finnessey in Miss USA 2004. After the top ten finalists were narrowed down to top five, all of us unanimously agreed that Miss Japan should win based on her personality, style, sincerity, multilingual skills, and of course, beauty. Initially, I had wanted Miss Switzerland to win based on looks alone, but she lacked personality. I didn't care much for Miss Paraguay, who I thought was rather pale and lacked energy in the swimsuit segment. There was no doubt that Miss Puerto Rico was the most beautiful, and since it is a beauty contest, it is only fair that the most beautiful should win. But Kurara Chibana took our breath away. It was more than her persona and supreme projection on stage; it was her ability to connect with the audience. During the first round of Q & A, she acknowledged the roaring audience for their support; she became emotional, almost doing a Yulia Lemigova, the second runner-up from Russia in Miss Universe 1991 who was choked by her emotions during the Q & A segment, but won the audience with her shining sincerity. To this day, Yulia is still very much loved and adored by pageant fans. Kurara is the new Yulia, and she will be surely remembered for a very long time.

WHY SHE LOST : It might have been Kurara's response to the final question that cost her the title. Each of the five finalists had to pick a question out of a bowl, and the question that Kurara had picked was the one made up by Miss Paraguay: "If you could change something in the history of humanity, what would you change and why?" Responding in Japanese and translated into English, she answered: "I believe there is not so much difference between men and women... only biggest difference will be the physical power of a man and sometimes men exploit his power and if we can only relinquish that kind of violence and also the kind of exploitation, we'll be better." Huh? Human nature is not the same as humanity. I wonder if the Japanese interpreter had misunderstood the question in English. Usually, questions with philosophical bent are not appreciated much in Anglo-Latin pageants. Perhaps in Asian or European ones, yes. So if Miss Japan's question sounded philosophical, naturally she had to respond philosophically because she had been culturally programmed to do so. Compare her profound response with Rivera's somewhat fabricated and unoriginal response to Glebova's question regarding the definition of success.

DON'T HATE ZULEYKA : Last Friday, some of us who had seen Donald Trump's interview in "The David Letterman Show" were bothered by Trump's superficial remark that suggested that "people want to see beauty." He did not mention wit, talent, personality, style or fluency in several languages as pre-requisites to winning the title. He did not even say that beauty has to be always natural. The four young women that he had brought with him to the taping of the show - revealed four unique types of physical beauty - but only one truly stood out - and that was Puerto Rico's Zuleyka Rivera whose appearance had been strongly consistent from the day she arrived in Los Angeles until the moment she was crowned, thanks mostly to the personal stylists that came with her.
Everyone knew that Zuleyka had undergone plastic surgery to improve her looks, or rather she had been subjected to cosmetic enhancements to attain the look that Trump desired. But Zuleyka is not any different from her predecessors (Denise Qui?ones, Iris Casalduc, Carla Tricoli, Cynthia Olavarr?a) - all of whom had been under the knife to improve their looks and to increase their chances of winning. When you try to sell a product, you have to make sure that it looks and tastes good; otherwise, no one would buy it. Magali Febles, the national director of Miss Puerto Rico Universe, had been testing the waters and she knows what kind of look would or would not sell. Not to mention her special connection with MUO. Yes, dear readers, it's true that ever since Trump took over MUO, the emphasis has purely been on looks. Forget personality or intelligence. As long as you can express yourself very well, regardless of the content of your spiel - and look stunning at the same time - then you're in.
So that's it, folks. Until next year. Congratulations to the Isle of Enchantment for producing a beautiful queen. But to many of us, the Samurai Queen reigns supreme.
The Judges