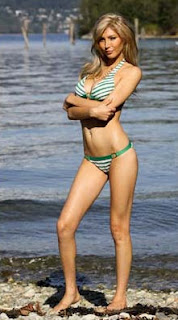 TORONTO - A prominent transgender advocacy group has slammed the Miss Universe Canada pageant for its decision to expel a competitor after discovering she was born a male.
In a terse statement posted on its site Friday, Miss Universe Canada said, "Jenna Talackova (photo) from Vancouver, British Columbia, will not compete in the 2012 Miss Universe Canada competition because she did not meet the requirements to compete despite having stated otherwise on her entry form. We do, however, respect her goals, determination and wish her the best."
Talackova's photograph has since been removed from Miss Universe Canada's site.
The organization did not respond to QMI Agency's request for a phone and email interview.
In an interview with QMI Agency. Mara Keisling, the executive director of the Washington D.C.-based National Center for Transgender Equality (NCTE), questioned the pageant organizer's motives.
A transgender-identified woman and a parent, Keisling is considered one of the leading voices for transgender equality in the U.S. She has appeared on CNN and CSPAN, and is regularly quoted in the New York Times and the Washington Post newspapers.
"It's straightforward. They made a decision that they want to discriminate against transgender women," Keisling said shortly after stepping off a plane in Charlotte, NC. "More and more people understand this person is a woman. There's nothing about her that should disqualify her."
Keisling added that "From what I've read, it doesn't sound like they had any rules. It seems like they made them up on the fly to disqualify her.
"It makes you wonder what they're afraid of."
The 61st annual Miss Universe Canada pageant will be held in Toronto on May 19.
SOURCE: Toronto Sun, 3/25/2012