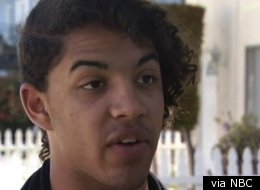 Kearian Giertz (photo) said he was being spontaneous and honest by responding to the question, “Where do you see yourself in 10 years from now?”

“And, I ended it with, hopefully, 10 years from now gay marriage will be legal in California, and I left it at that,” Giertz said.

With that comment, the Fullerton Union High School student was disqualified from the Mr. Fullerton pageant, an annual contest for senior boys that takes place at the California school’s Plummer Auditorium.

“Everybody started cheering him and then Mr. Abell came out and said, ‘Cut him, cut him,’” said student Isaac Fanti. “But he was just speaking his mind.”

Students are now questioning why Vice Principal Joe Abell would remove Giertz from the competition.

Within 24 hours, district officials sent a statement to parents saying no school rules were violated.

In the letter, they admit the matter was not handled appropriately and noted that the vice principal gave a personal apology.

“Currently, in the student handbook, there is nothing protecting students based on gender or sexual identity, which I’ve been campaigning for two years with no luck,” said another student Blake Danford.

Students began passing out letters to be handed to the vice principal, asking him the same question asked of Giertz.

“No one should have been offended. Nobody was,” Giertz said. “You don’t check your First Amendment rights at the gates of the school.”