The politics of beauty pageants in Lebanon and the Arab world

From a western perspective, beauty pageants represent a development in how western societies view women and beauty as powerful means of communication to change public perceptions and stereotypes.

In developed western societies with highly complex economies, communication often means that looks are very important in how the message is formulated, delivered and presented. Such factors can sometimes make all the difference between success and failure in business or careers or politics.
In the Arab World, the art of public relations and effective communication is still in its infancy. Communication often times is presented as a set of sacred facts or absolute truths that are expected to override any other consideration. In this communication model, there is no spin of facts and no dressing up of arguments and no sugarcoating of words. Communication is often blunt and relies on the emotive use of language. Facts are presented meticulously clinical regardless of their perception or impact.

In the West, however, facts are presented with a spin that creates a perception which in turn becomes a reality regardless of what the original facts looked like. For the Arab societies, their modern world is a world that was created and invented by the West. Almost everything from education, to entertainment, to medicine, to travel to communication is one way or another western. It is almost impossible; moreover, to escape the dominant western globalized culture while at the same time maintain traditional value system.

“Beauty pageants have a powerful ability to change the way the West looks at the Arab People and Islam as a religion.”

From a conservative Islamic perspective, however, not everyone agrees with Hanania’s argument. Beauty pageants especially that it includes wearing swimsuits and an evening wear in public would fly in the face of religion that calls on women to maintain virtuous lifestyle including dressing modestly.
Muslim women, in addition, are not supposed to wear revealing clothing in public. Islamic religion and Arabic culture consider such clothing to be inappropriate, disrespectful and harmful to the woman’s reputation.

But that’s not always the case even with Muslim women in Muslim societies or Muslims of the West. 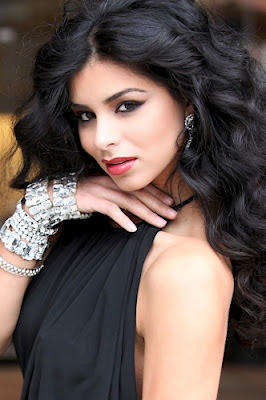 Addressing the question of contradiction between her faith and her winning the title that included showing her body in public, Faqih said on her website that her family is not a strict Muslim family, rather, “spiritual Muslims.”

Faqih who emigrated to U.S. from Lebanon in 1993 has made a lot of people especially in her native country proud when she won the Miss USA crown. Fakih’s luck, however, appears to have run out when she was arrested late last year for drunken driving in Highland Park Michigan. She is currently pursuing a career in wrestling.

Meanwhile, Michigan-based Lebanese-American attorney Joumana Kayrouz agrees with Hanania on the importance of beauty pageants for different reasons however. Kayrouz, who is also the president of Miss Lebanon Emigrant organization, sees no contradiction between beauty pageants and moral values especially those of her home country Lebanon.

Kayrouz sees beauty pageants as part of Lebanon’s uniqueness and as being a “special country” in the region which unlike its neighbors has been the leading or “avant- garde” of culture, music, fashion, computers, and beauty according to Kayrouz.

As to why Lebanon is a “special country” and liberal in a generally conservative region and why is it endowed with such cosmopolitan traits that other Arab countries seemingly lacking, Kayrouz argues that it was because of “Christianity.”

“Lebanon has been historically a predominantly Christian country, and since Christianity does not prohibit women from wearing swimsuits or showing their bodies in public, Lebanese women were able to compete freely in beauty pageants and show their beauty without religious or societal prohibitions that are normally associated with Muslim societies.”

Other factors that made Lebanon the way it is today according to Kayrouz, included being a former French colony which had a positive influence on Lebanon.
For Kayrouz, beauty pageants events are an opportunity for the Lebanese community to show Americans “Lebanese brains and beauty.” Besides their” brains and beauty”, Lebanese Americans are perhaps the most successful of all Arab Americans in terms of being thoroughly assimilated in the American culture.

Lebanese, especially Christians are generally the only Arab Americans to have served in the U.S. congress, mayors, and governors and in Hollywood. It is these involvements that gave the “Lebanese” label and brand its insulation from the negative stereotype that is normally associated with the word “Arab” or “Muslim” In America.

Thanks to its “Christian” image, the strength of the Lebanese label in the West is generally positive and still endures even in the Arab world, particularly the Gulf States. A Christian Lebanese journalist told me last year that in the rich Gulf region, Christian Lebanese professionals are preferred over Palestinians, Egyptians and Syrians. The reasons for that, he argued, were because Christians Lebanese, being Christians, are viewed as conveniently western Arabic speakers without the political baggage that for example Palestinians, Syrians, or Egyptians allegedly have.

Despite its western pretentiousness, however, Lebanon is not a democratic country in the western sense and governing is based on the consensus of its militarized and feuding religious sects. In that respect, Lebanon is no different than any of its Arab and Muslim neighbors and very much Arab in its clannish culture and tribalism. But for Kayrouz and others, that’s not the case, Lebanon is decidedly Western and Christian.

When I asked her if she would define Lebanon as an Arab or Middle Eastern country, she disagreed; “Lebanon is a Lebanese country.” She said.

(Ali Younes is an Arab American writer and Journalist based in Washington D.C. He can be reached at : aliyounes98@gmail.com, and on twitter @clearali.)
SOURCE: English El Arabiya, 5/29/2012
at 8:10 AM