Beauty pageants have a pretty bad rep.
Up until 1970 some beauty pageants refused to allow women of color to vie for the crown. Even Miss Black France, Mbathio Beye, was caught up in a controversy this year after protestors called the pageant "stupid," "dangerous" and "hostile. "
But the former Miss USA, Kenya Moore (photo), is ready to give the world of pageants a much needed makeover. 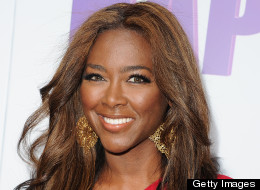 This September, Kenya is hosting Miss More 2012, a "modern day beauty pageant, for the modern day woman." Kenya's pageant is inspired by today's female CEO's, presidents, educators, philanthropists, motivators, and leaders. Beauty queens without drive need not apply. The competition will be hosted on a major news network and will feature a special appearance by the beautiful Leila Lopes, Miss Universe 2011.
“I wanted to create a positive platform for women of color that exemplifies who we are in this day and age, in this century and to make a positive contribution to society as a whole," Kenya said in a press release. "Women rule the world, and Black women own it."
So what kind of women is Kenya looking for? Fabulous single women of color between the ages of 18 and 40 that live in the U.S. College students in the state of Georgia are also welcome to apply. And even if the thought of winning a beauty pageant isn't high on your bucket list, the prizes may entice you. The winner gets $2,000 in cash, an expense paid trip for two to Barbados and a role in the next film or production made by Kenya's media company, Dark Horse Productions, along with a yearlong appearance contract. You also get to don a custom made gown, sash, and crown.
To sign up for a chance to claim your crown, check out The Miss More 2012 website.
SOURCE: The Huffington Post, 8/15/2012
at 4:53 PM