Miss America welcomes a tattooed contestant for the first time 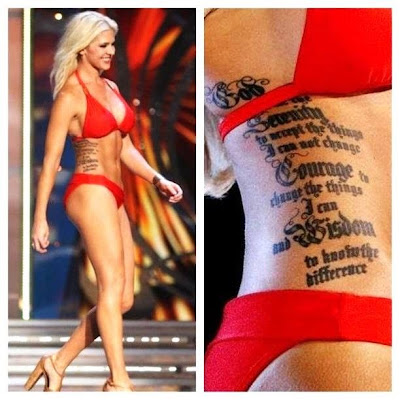 As conventional as the Miss America pageant may seem — and almost quaint in an era of debauched ex-Disney starlets twerking their way to the top of the news cycle — the longstanding beauty contest is no stranger to ever-so-gently pushing the envelope. It began in the 1920s as a national ritual enshrining good looks with patriotism and good ol' conservative values. But, since then the pageant has tried to keep up with the zeitgeist, if always slightly behind the curve. In 1974, Miss America winner Rebecca Ann King publicly declared her support to legalize abortion. In 1984, Vanessa Williams became the first woman of color to win the title (only to relinquish it shortly later when Penthouse published nude photos of her and a scandal ensued). And, tonight in Atlantic City, Miss Kansas, Sgt. Theresa Vail, will walk down the catwalk and pull a Miss America first: She'll expose her tattoos.Don't expect a full sleeve of flaming skulls on the sergeant, though. Vail is only inked with the insignia for the U.S. Army Dental Corps on her left shoulder and the Serenity Prayer running down her right side. Still, Vail stands apart from her competition as both a servicewoman and a member of the tattooed ranks, too. "Nobody expects a soldier to be a beauty queen," Vail told People, "but I'm all about breaking stereotypes." Well. The question, however, is whether those stereotypes are in need of breaking. (Miss America's standards of beauty have not exactly kept up with the rest of the country, have they?) If anything, it's everything but Vail's tattoos that make her more compelling: She can skin a deer, she's a crack shot with an M16, she's fluent in Chinese, and she can master an aria in less than 48 hours. But Vail's decision to bare her tattooed skin is perhaps more boundary-breaking for the staid Miss America pageant than any of her fearsome skills, and it still comes from a good place. "How can I tell other women to be fearless and true to themselves if I can't do the same?" she asked. "I am who I am, tattoos and all." (People)