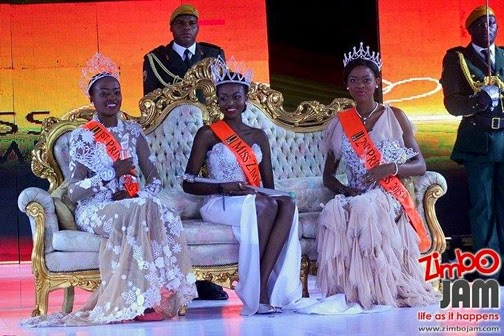 Miss World Zimbabwe Emily Kachote could be stripped of her crown should allegations about her purported appearance in leaked nude photographs prove to be true, the pageant organizer said Tuesday. Photos supposedly showing the newly crowned pageant queen drunk and naked surfaced on social media over the weekend. Kachote’s ex-boyfriend claimed he took the pictures, the Chronicle newspaper in Bulawayo said.

The Miss Zimbabwe Trust said it would not dethrone the reigning queen without an investigation. But if the allegations are true, then the pageant organizer would have to revoke her crown. “When we sit down with Emily to get her side of the story and if our investigations find that this is true, then we’ve no option but to dethrone her and replace her with the first princess Anne-Grace [Mutambu],” the Chronicle quoted trust representative Tendai Chirau as saying.

Competitors in the Miss World Zimbabwe pageant had signed statements saying they had never posed nude for a photo, the Herald daily newspaper in Harare reported. “When the girls toured the country’s provinces, we told them that if they had posed nude anywhere, they were not supposed to participate in the pageant, and those who qualified for the finals assured us that they do not have any nude pictures anywhere,” Chirau said at a press conference Monday.


Kachote, a 25-year-old financial adviser, had little to say in an interview with the Herald newspaper. “I don’t know what this is all about. That is all I can say for now,” she said.

However, the pageant queen apparently told the local tabloid H-Metro she was aware of the nude photos and that she had hoped her ex-boyfriend deleted them, the South African online news site News24 reported. “I was hoping the pictures would have been deleted by now since it happened a long time ago and I last spoke to the guy a year ago and I no longer have anything to do with [him] since what we had ended a long time ago,” Kachote was quoted as saying. “I have always suspected that those pictures would circulate, but it happened a long time ago, and I believe my past does not determine where I am going.”