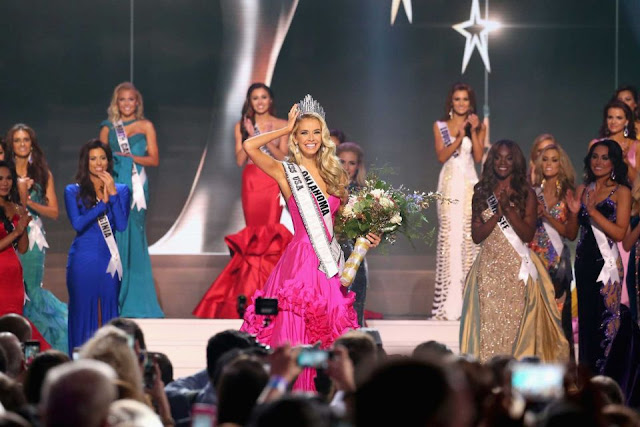 BATON ROUGE, La. (AP) — Olivia Jordan of Oklahoma was crowned Miss USA on Sunday, wearing a hot pink strapless dress as she deftly fielded the interview portion of the competition by saying the country needed to improve race relations to beat out 50 other contestants.
After weeks of controversy generated by pageant co-owner Donald Trump’s critical comments about Mexican immigrants, the pageant passed with no mention of the real estate mogul who was not in attendance.
Instead, the focus was on women like Jordan and others who’d worked hard to get to the stage.
The 26-year-old winner was followed by first runner-up Ylianna Guerra, 22, of Texas, and second runner-up Anea Garcia, 20, of Rhode Island. They were followed by 25-year-old Miss Nevada Brittany McGown as third runner-up and then Miss Maryland Mame Adjei, 23, rounding out the top five.
Jordan, who takes over from 2014 winner Nia Sanchez of Nevada, was a standout during the interview segment when each contestant was asked two questions and given 30 seconds to answer each. When asked what the next big issue is that the U.S. needs to tackle, she said it was race relations.
“We have not solved this issue,” Jordan said. “We really need to work on being an accepting society.” 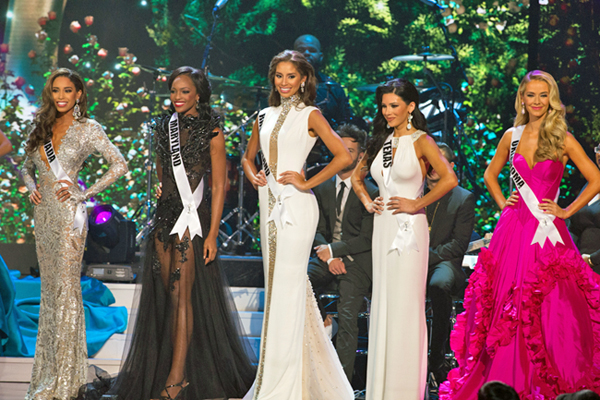 During the second interview question about which woman should be put on the new $10 bill, she initially said she wished television star Oprah Winfrey was eligible before ending by suggesting Harriet Tubman, a former slave who led other escaped slaves to freedom.
Asked afterward by The Associated Press about the Trump controversy, Jordan responded: “We have freedom of speech in this country, and immigration is certainly an important issue.”
She added, “This organization is not one person. It’s definitely not just me. It’s a family. This organization celebrates diversity, and I think that was clear on the stage tonight, and I look forward to spreading a message of love and diversity and acceptance.”
The annual contest, generally known for its dazzling dresses and sexy swimsuits, was this year under an uncomfortable spotlight due to comments made by Trump, the pageant’s co-owner.
Trump slammed Mexican immigrants during his announcement that he was running for president. That led to widespread fallout against his business dealings, including the pageant.
Broadcasters, including NBC and Univision, dropped the pageant and a slew of celebrities lined up to perform, judge and host dropped out just as the pageant was kicking into high gear in Baton Rouge.
Pageant organizers rushed to fill the gap so the show could go on. Satellite and cable channel Reelz television stepped in to air the show, while assuring people that Trump would not benefit financially. It was also streamed live on the pageant’s website. And former Miss USA and Miss Universe winners were recruited as judges.
The pageant featured an evening wear and swimsuit competition as well as the question and answer session. The preliminary contest was held earlier this week and then the number of women remaining was progressively narrowed during the course of Sunday evening’s telecast.
Jordan, of Tulsa, Oklahoma attended Boston University, where she earned a B.S. in Health Science and was a group fitness instructor and a personal trainer. She has appeared in several national and international commercials and feature films, most recently, Hot Tub Time Machine 2.
Source: The Washington Times, July 13, 2015