Claims of mistreatment, fake candidates, sexual improprieties, danger, and deceit (lots of it!)

The first edition of World Beauty Queen pageant, which took place on a beach last Friday, August 22nd, in Incheon, Korea, got off to a bad start, and we mean a really bad start.  A pageant insider who is based in Asia has informed Critical Beauty that the new pageant, co-organized by Alan Sim (owner of Mister International pageant who was involved in a scandal earlier this year) and Jung-Hoon Jun (Sim's business associate and the Korean national director for Mister International), is a fake pageant designed to make money by exploiting gullible contestants. The winner from Japan, Kazue Oshima, is actually 30 years old (even though the age limit is 26).

There were only 14 contestants (4 of whom had questionable background). Two contestants (Misses Australia and Estonia) rushed off the stage after the pageant because they were so disgusted by the results - which appear to have been rigged - among other things.  There were no African or Latin American delegates, and that the mother of Miss Indonesia was crying because the organizers treated the girls like prostitutes.  Miss Australia (who wishes not to be named) immediately took her complaints to social media, accusing the organizers (Sim and Jung-Hoon) of mistreating, abusing and endangering the lives of the contestants some of whom feared the two men. Her national director, Choy Symes, posted her rants to Symes' Facebook page and to a Facebook group page for national directors. Miss Australia's statement reveals horrible situations in which the girls had been placed during their stay in Korea. 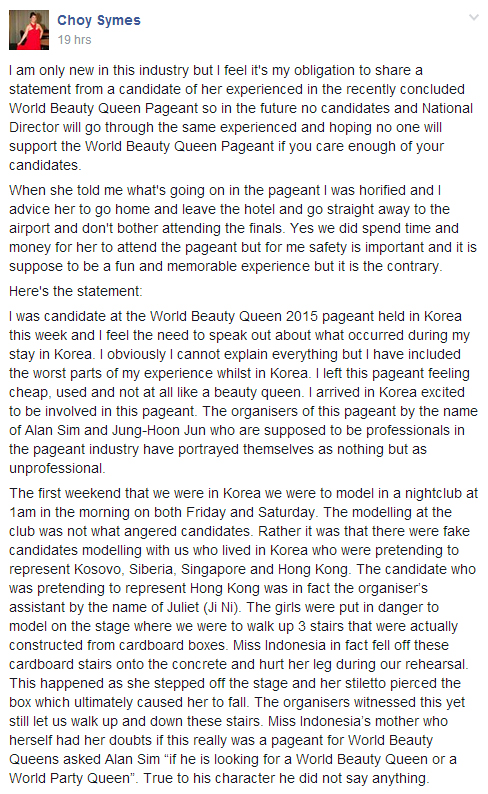 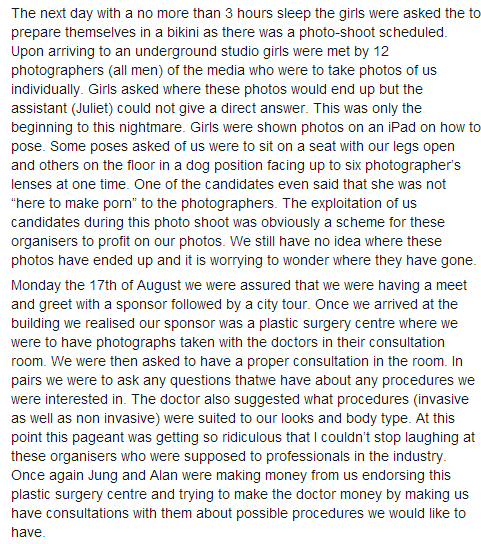 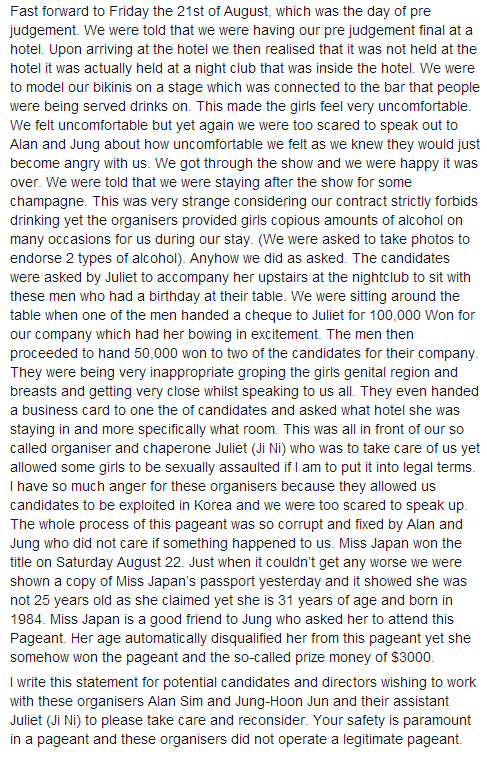 Alan Sim posted his response to the Australian delegate's claims, denies any wrongdoing that he had been accused of and tries in vain to explain his side of the story, even educating the readers about "cultural" differences between Koreans and non-Koreans. If that were the case, one would think that the foreigners should have been given a crash course on Korean customs and mentality, right? 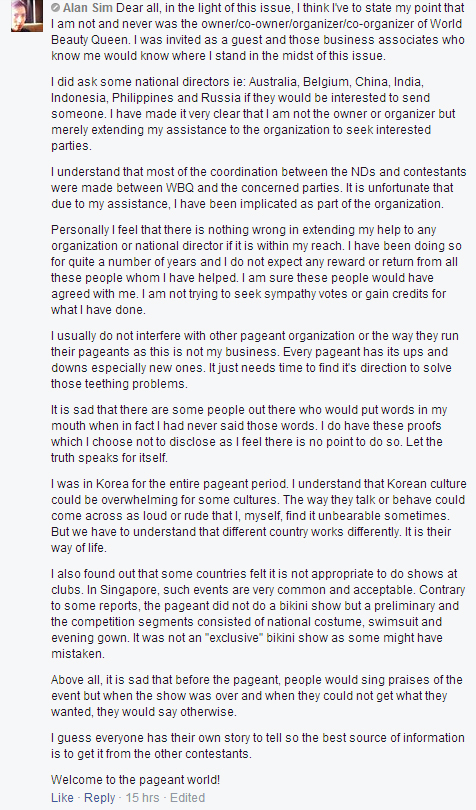 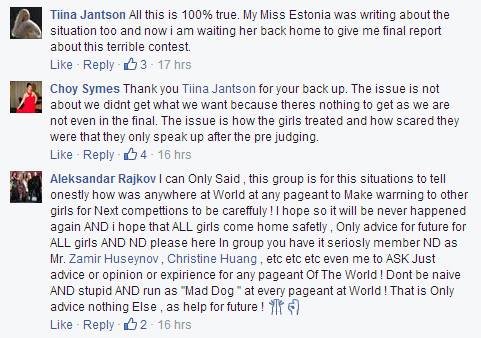 Sim's explanation seems to have fallen in deaf ears, since no one "liked" his post even fifteen hours after he had posted it. Even if he claims that he is not the "owner or organizer," he had a moral obligation to make sure that the safety of contestants would be top priority. Sim has been producing pageants for many years, and it is simply nauseating to think that he is desperately trying to wash his hands of the incident and indirectly blames the contestants themselves. Obviously, Sim and his Korean colleague Jung-Hoon Jun were more concerned about putting on a show and extending their profits instead of extending a helping hand to the girls in distress. 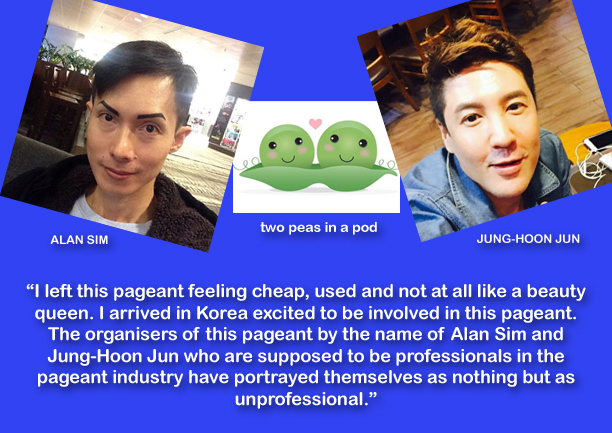 Miss Estonia also released a statement illustrating her side of the story which resembles that of Miss Australia. It was sent to us by Choy Symes with whom Miss Estonia has been communicating. She writes:

I was a candidate at the Miss World Beauty Queen 2015 pageant held in Korea 12-24 August, which turned out to be a disaster and I feel the need to speak about that. The organizers of this pageant Alan Sim and “president” Jung-Hoon Jun turned out to be fake and unprofessional. They rather used us to do promotional work for different nightclubs and different alcohol brands.

When I arrived I was shocked, cause instead of 30 candidates arrived only 11 from another countries and +2 local girls. The others had canceled their trip in the last minute, as I understood. The accommodation was organized in one under-renovation Hotel called Sunshine (Gangnam-gu, Seoul, Korea). The food that they gave us was fast (junk) food: pizzas, hamburgers, Korean fast food from day to day, seems like that they just wanted save money on our expense. Many girls felt sick after eating local fast food, including me.

Because of the lack of girls, the “president” invited her friends to be fake candidates who actually lived in Korea: Kosova, Siberia, Singapore and Hong Kong, were all actually locals, to do the show in the nightclub. The candidate who was pretending to represent Hong Kong was in fact the organizers assistant by the name of Juliet (Ji Ni).

*Sponsor from nightclub
First weekend (2 nights) modeling and promoting the nightclub they put 3 cardboard boxes as stairs on the way to stage, that what we had to walk up. On the first night Miss Indonesia hurt herself falling off the stairs on her heels and the organizer didn’t even care. Show had to go on like this. Her leg and her hand were badly injured because of that.

The next day (Sunday) with 3 hours of sleep first group of girls had to be ready (with hair and make-up) for bikini photo-shoot. I stood up and went to ask from organizers assistant Juliet, can they maybe have an extra hour sleep, cause we were tired and weak from the night, and she got mad and started screaming that who am I to complain. The photo-shoot was taken individually in one dirty underground studio with about 12 photographers. Girls , me included, were asked to take “sexy” poses which were insulting and demeaning, I said that “I don’t do porn!” and also other girls refused doing poses which belong to men’s magazine. We don’t even know where they used these photos. They didn’t answer that.

*Pre judgement held in a nightclub 21st of August
First organizers let us know that the pre judgement is held in a hotel, later it turns out that it’s held in a nightclub inside the hotel. Also the way to the stage (small stairs) was dangerous for girls with big dresses and high heels. Miss Thailand’s dress got stuck on the stairs but luckily she didn’t fall. We had to do a show with national dress, evening gown and bikini. There where girls who felt uncomfortable doing bikini show in front of drunk people who where partying.

After the show we had to stay for some champagne, although the contract forbids us from drinking alcoholic beverages during the pageant, we were offered alcohol on many occasions. The organizers were paid for us sitting with men (over 35 or 40 years old) who were rude, trying to touch girls genital region, breasts, asking phone numbers, asking which hotel (and room) we are staying and offering money. It was all in front our organizer assistant Juliet, who was supposed to take care of us but instead she took a cheque from the men.

When we got ready to go back to our hotel it turned out that some of the girls national gifts were stolen from our backstage (Australias and Indias).
*Final at Tiger Beach 22nd of August
(Held in front of no more than 15 people in the audience)

Miss Japan won the title, who was actually a good friend to Jung Hoon Jun, who invited her to attend this pageant. After the final one the girls had acquired a copy of Miss Japan's passport which we were shown and it showed she isn’t 25 years old as she said, instead it turned out she is 31 years of age, born in 1984. Her age automatically disqualified her from this pageant yet she somehow won the pageant.  After the final the organizers of the pageant were done with us, we were left to fend for ourselves, we had to buy our own meals and arrange our own transportation to the airport.


I write this statement for potential candidates and directors wishing to work with these organizers Alan Sim and Jung-Hoon Jun and their assistant Juliet (Ji Ni) to please take care and reconsider involving yourself in a pageant involved with them. (End) 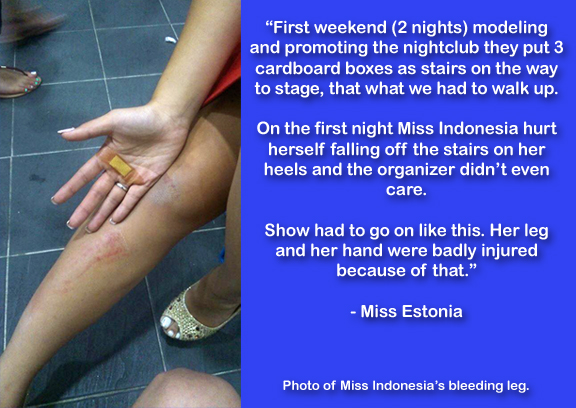 Choy Symes was so disgusted by Sim and Jung-Hoon's unprofessional and unethical behavior that she later posted an angry note on her Facebook page: 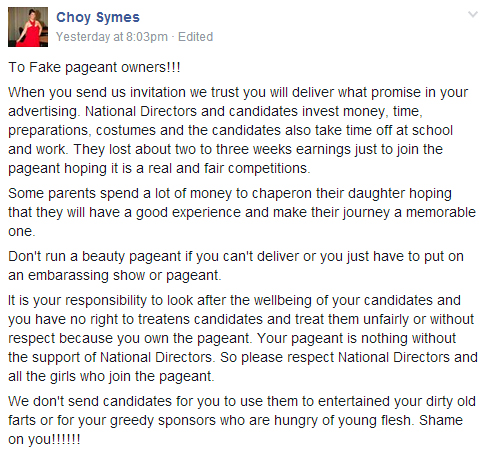 So there you have it. Another bogus pageant with the most generic and uninteresting name - World Beauty Queen - organized by two men who preyed on gullible young women and exploited them for financial gain. Fortunately, two contestants were brave and smart enough to call out on Sim and Jung-Hoon and denounce them for who they really are: partners in crime. I am sure more details will surface, but for the time being I highly advise all national directors who sent contestants to this tacky pageant to end all professional ties with Sim and Jung-Hoon, unless you prefer being in misery's company.

Choy Symes sent me a screenshot of Miss Indonesia's statement. 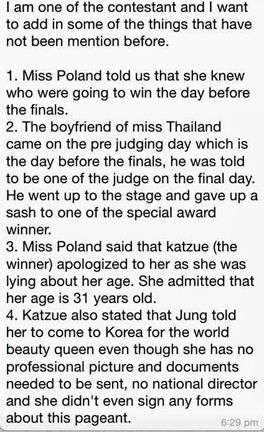 Critical Beauty also received a message from the pageant insider saying that Miss Japan had informed Jung-Hoon that she is over age, that he had invited her to compete at the last minute, and that she never thought she would win (she thought Miss Philippines was better than her). She also said that every time the girls went to the bar, a lady chaperone always accompanied them, and neither Sim nor Jung-Hoon took the time to assure the girls' safety. Lastly, she said that she did not receive her cash prize.
____

Critical Beauty received a message from Kazue Oshima herself requesting to have the photo of her passport removed, which we have done. She also gave her correct age - 30 - and not 31 as we had originally posted. 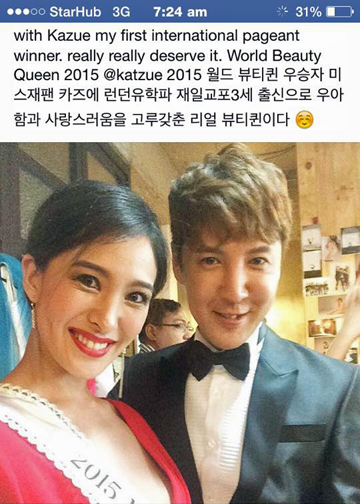