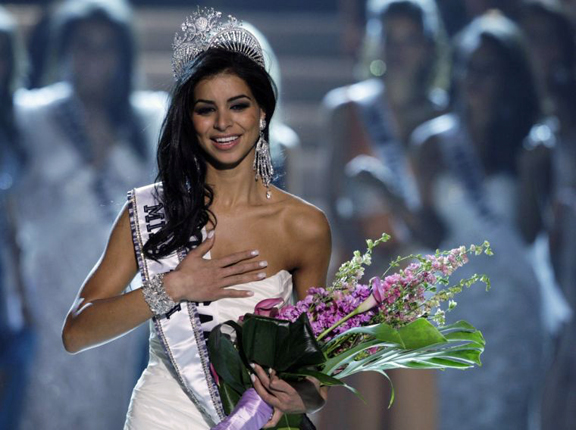 The woman who was believed to be the first Muslim to win the title when she was crowned Miss USA in 2010 has converted to Christianity.

Rima Fakih gave her life to Christ last month in the run-up to her marriage in Lebanon next week to Wassim Salibi, a wealthy music producer who is a Maronite Christian. Canadian singer The Weeknd, who is managed by Salibi, will perform at the wedding.
Fakih recently tweeted a verse from Philippians: 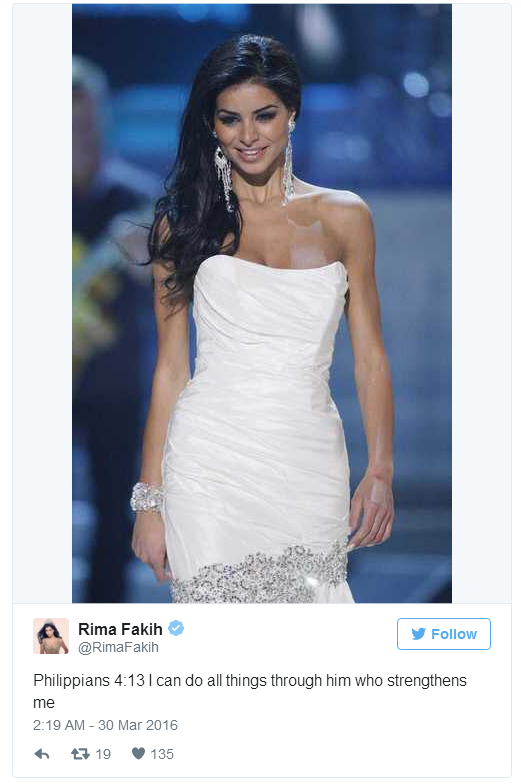 Fakih's faith was Shia Muslim but she attended a Catholic school.

In a Huffington Post interview in 2010 she said: "We're more of a spiritual family. Religion really doesn't define me or my family. My family's been very liberal, and we appreciate all different kinds of religions."

She added: "My brother-in-law is Christian, and he (and my sister) baptised their two sons. I have an uncle who converted to Christianity, and he's a priest now."

She said: "We'd go to church on Easter. We always had a Christmas tree and every year we go the Radio City Christmas Show, and watch Miracle on 34th Street. But we celebrate some of the Islamic holidays as well."
According to Albawaba, It was only when she went to university in the US that Fakih connected with her Muslim roots: "When I went to the University of Michigan, because there's more of a Muslim community, my dad wanted me to learn more about Islam," she said. "I didn't know much about Ramadan and other holidays, and my dad wanted me to take that opportunity and learn."
On social media, most responses have been supportive of her conversion.
After she won the top beauty pageant, Fakih was quoted as saying: "I'd like to say I'm American first, and I am an Arab-American, I am Lebanese-American, and I am Muslim-American." Some Muslim scholars at the time criticised her for entering the competition in the first place.