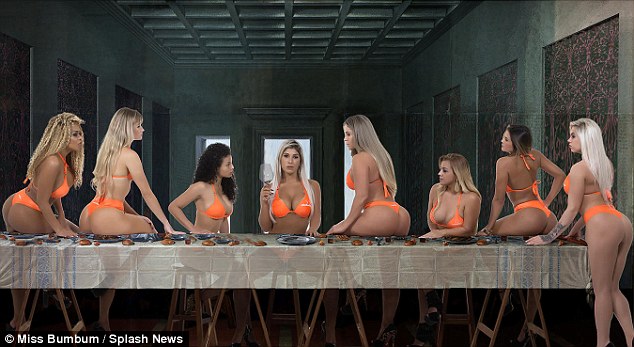 Brazil's Miss Bumbum beauty pageant has sparked anger after bikini-clad contestants posed for a recreation of the iconic religious painting The Last Supper - with the woman with the 'sexiest' bottom playing Jesus.

In the photo, eight hopefuls in the popular 'rear of the year' contest are portrayed as Christ and his disciples on the night before his crucifixion in a scene that has offended many in the deeply Catholic country.

Last night religious leaders branded the remake of the Da Vinci masterpiece 'deeply disrespectful' while even Brazil's religious intolerance commission waded in to the debate as anger over the picture grew.

And even the women competing for the 'best bottom' title last night expressed dismay at being made to pose for the controversial scene, with one claiming she had 'asked forgiveness from God for a great sin'.


Now in its sixth year, Miss Bumbum is one of Brazil's most hotly-disputed beauty contests with winners becoming overnight celebrities and often going on to earn millions and modelling contracts and endorsements.

After a public vote, the 27 contestants, each representing a Brazilian state, are whittled down to 15 who then battle it out in a live final on November 9.

Daiana Fegueredo, representing the state of Ceara, was chosen to play Jesus in the photo as her bottom received the most number of phone votes, making her the frontrunner in the race for the coveted title. 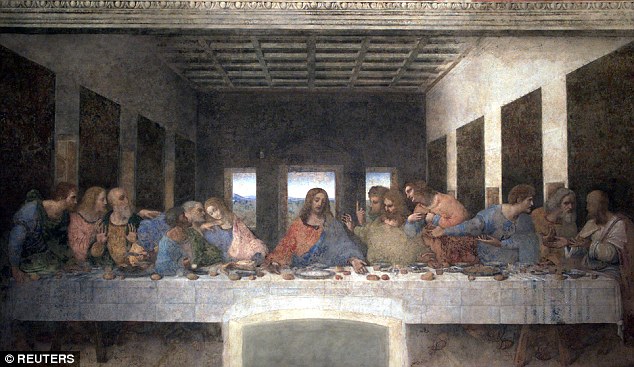 But she said she now regrets agreeing to taking part: 'I did the photo because of my contract. But I didn't like it and I wasn't happy about it. You can't play around with the word of God.
'I completely understand people being angry about it, because even I'm angry and I'm in it. For me it is blasphemy.

'I feel really bad deep inside of me. I'm a practising Catholic. Since I did the photo my heart is tight inside my chest, I can't sleep and I don't stop thinking about it. I've already asked forgiveness from God, and I ask forgiveness from everyone else. We went too far. We were part of a great sin.'

Another contestant, Danny Morais, representing the state of Santa Catarina, said that at first she didn't understand what they were being asked to do.

She said: 'Afterwards I was filled with remorse. God knows my heart and knows I wasn't being bad. I think we can be controversial in other ways, but not using God's name, not using a biblical story.'

He said: 'Everyone's talking about it. It has broken the boundaries of ethics and respect, all in the name of money. This isn't creativity, it's the vulgarisation of the sacred and is deeply disrespectful.'

While assistant bishop of Rio de Janeiro, Antonio Augusto Dias Duarte, also criticised the photos, saying he was against any images showing women's bottoms, 'whatever the setting'.

He added: 'Women need to be valued for their role as a wife, mother, professional, and for her intellectual and cultural qualities.' 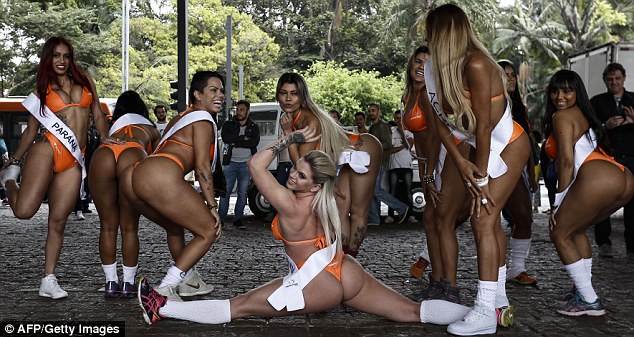 In a statement, Babalawo Ivanir dos Santos, from Brazil's Commission to Combat Religious Intolerance, said that the picture was evidence 'that intolerance is not just confined to African religions.'

But the founder of the Miss Bumbum competition, Cacau Oliver, claimed the image was 'not offensive to the church' and never meant to shock anyone.

He said: 'It was the last meeting of the women before the grand final. It reminded me of the Last Supper. It was where Jesus was betrayed by Judas, because of jealousy, and like it or not the woman with the most votes is also the target of jealousy.

'She is at the centre, and the other girls will want to crucify her because she got more votes than them.'
SOURCE: Daily Mail UK, 10/24/2016