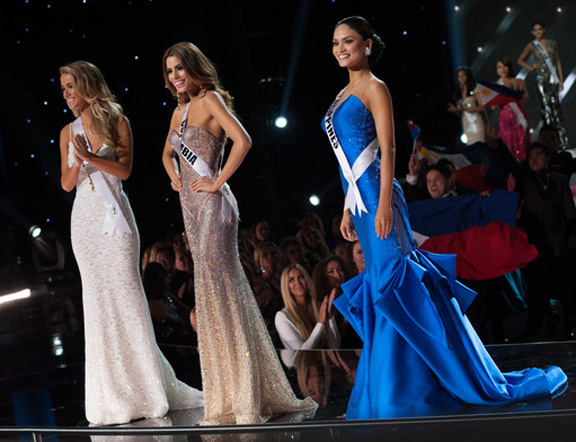 MANILA, Philippines – Miss Universe is changing its format.
WME/IMG, the world's biggest talent and entertainment agency, purchased the Miss Universe, Miss USA, and Miss Teen USA Pageants from Donald Trump last year. However, the pageant was set to be held too close to the time of acquisition that the agency could not implement the changes.
Pageant fans have reason to be concerned over the development because it lessens the chance of their country competing at the live finals.
Between 2003 and 2015, a Top 15 was selected. The “Fan Vote” winner earned the 16th spot from 2011 to 2013.
According to the updated Miss Universe website, this year, the preliminary competition determines a Top 12, instead of a Top 15.
The coronation night will start with the Top 12 pre-determined by the judges during the preliminary round.
From the Top 12, the Top 9 are determined by averaging the scores of the judges and the fans' votes after the swimsuit segment.
The Top 6 are then determined by averaging the judges' and fans' votes after the evening gown segment.
Last year, Miss Universe 2015 Pia Wurtzbach was part of the Top 5 and participated in the question and answer (Q&A) round then. She then answered another question as part of the Top 3.
This year, there will only be one Q&A round. The Top 6 will participate in the Q&A round, while the Top 3 will only get a "Final Look" from the judges and fans.
"During the last stage of the competition, the judges and home viewers are asked to make a decision based on their overall performance through the Final Look. Rather than score, this segment is ranked, meaning the judges and home viewers base their vote on who they think should win the title," reads the news rules posted in the site.
This new 12-9-6-3 format relieves the pressure of having to undergo a second round of questions in the Top 3 where so many great beauties faltered in the past. The candidates must really shine and do their best during the Top 6 Interview Round in order to secure a place. It is in this round that candidates can gain ground. There are no second chances.
The Top 3 Final Look eliminates the chances that a front runner messes up her answer or that a dark horse overtakes the competition with an impressive answer. The new owner believes that this format will help produce the type of winner who would best represent the brand.
On January 30, 2017, we will see how this new format affects the results of the 65th edition of the Miss Universe pageant.
Source: Rappler.com, 1/20/2017