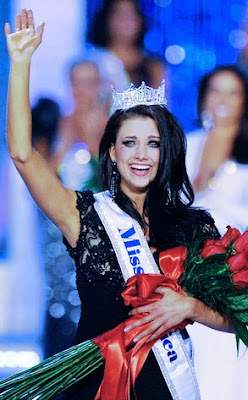 • THE NEW MISS AMERICA is Laura Kaeppeler, 23, Miss Wisconsin, who was crowned Saturday night at the Theatre for the Performing Arts in Planet Hollywood Resort and Casino in Las Vegas. Her court includes 1st runner-up Betty Thompson (Miss Oklahoma), 2nd runner-up Kaitlin Monte (Miss New York), 3rd runner-up Jennifer Sedler (Miss Arizona), and 4th runner-up Noelle Freeman (Miss California). Kaeppeler's victory marks Wisconsin's second crown which was first won by Terry Meeuwsen in 1973. "In that moment I didn't know what to think," Kaeppeler says. "It was all kind of a blur." The odds-on favorite was crowned on the 91st anniversary of the pageant. Aside from the shimmering crown, Kaeppeler, 23, receives a $50,000 scholarship and represent the Miss America pageant for the next year.


Kaeppeler breezed through the always tricky Q&A segment after being asked whether Miss America should make her political party publicly known. Claiming politicians need to represent the masses, she replied, "Miss America represents everyone and I think a message to the political candidates is that they represent everyone as well, so in these economic times we need to be looking forward to what America needs and I think Miss America needs to represent all." The stunning brunette performed operatic vocals as her talent, and sashayed in a white bikini and black beaded evening gown during the two-hour competition. Over the next year, Kaeppeler said she will focus on stressing the importance of education. She plans to use her scholarship money to go to law school and hopes to mentor children of incarcerated adults.


I saw the pageant live in the comfort of my living room and gave a play-by-play updates via Twitter. Things that I liked about the production: the uptempo, fast-paced introductions of the all 53 contestants; the colorful dresses worn in the intros; the presentation of the judges on stage; the sexy yet classy swimsuits; the non-placers remaining on stage instead of being herded backstage; the elegant evening gown competition; and the recognition of past title holders including Miss America 1984 Vanessa Williams (perhaps the most successful winner ever). There are two things that annoyed me. First, eliminating a semi-finalist from the talent competition while she was ready to perform. And second, the surprising twist - that one of the three eliminated girls would be saved by eliminated delegates after swimsuit competition to compete in evening gown - which was just plain silly and became even sillier when the eliminated delegates line up behind the contestant they thought should be saved (Alabama). Overall, the top five all deserved their placements and the winner is a mighty upgrade from last year - at least from a physical perspective.

• MISS AMERICA RATINGS : Up against CBS' monster NFL AFC Divisional Playoff Game (Denver Broncos-New England Patriots) and an NFL playoff overrun-fueled Fox on Saturday night, ABC's 9-11pm broadcast of The 2012 Miss America Pageant grew year to year and made it the dominant #1 non-sports network in the time period with Total Viewers and Adults 18-49. Building steadily throughout its 2-hour telecast, The Miss America Pageant's audience jumped by 2.8 million viewers and by 47% from its first half-hour to its final half-hour. In fact during its final half-hour from 10:30-11pm, The Miss America Pageant drew an average audience of 8.0 million viewers and earned a 2.2 rating, 6 share with young adults. Excluding only its high-rated 2011 New Year's Eve programming, ABC scored its best non-sports Adult 18-49 rating in the 2-hour time period in more than 1 year - since 12/25/10. Despite the big NFL competition, The Miss America Pageant increased its overall audience and surged by 13% in Adults 18-49 over last year's broadcast, marking the program's top numbers since 2004. (The Futon Critic, 1/15/2012)

• THE WINNER of the Tropic Beauty Model Search 2012 is Ligia Hernández Frías, 26, representing Margarita, Venezuela, who was crowned January 14 at the MGM Grand Hotel in Las Vegas, Nevada. Hernández competed in Miss Venezuela 2008 and represented the state of Aragua. Watch her coronation here.

• MARRIED FOR THE RIGHT REASONS : Peter MacKay's wedding toNazanin Afshin-Jam (photo right) is making headlines again and this time it's for a good cause. The Canadian Defence Minister and his new wife have sold their wedding photos to Hello Canada magazine. In exchange, the publication is donating $5,000 to Afshin-Jam's charity, Stop Child Executions, according to the Globe and Mail. Afshin-Jam's manager and brother-in-law, Peter Karroll, told Hello the couple needed to be convinced that the photos from the Mexican wedding should be released. “She said ‘Well, can we benefit some of the causes?’” Karroll said. “And I said ‘I am sure we can make some arrangements.”

Maclean's magazine also obtained rights to some of the photos and will donate $3,000 to the charity Soldier On, which helps ill or injured Canadian soldiers and veterans take part in recreational activities. The couple shared their first wedding photo on Facebook last week. In it, the couple is showered with white rose petals as they emerge from the private, civil ceremony. Afshin-Jam may be best-known for winning the Miss World Canada crown in 2003, but the Iranian-born Canadian is much more than just a beauty queen. Her family came to Canada from Iran in 1981 following the Islamic revolution there. She holds degrees in international relations and political science from the University of British Columbia and also studied at the prestigious Institut d'Études Politiques de Paris and the International Study Center at Herstmonceux Castle in England. She speaks three languages: English, French and Farsi.

n 2003, she mounted a successful campaign to stop the execution ofNazanin Mahabad Fatehi, an Iranian teenager who was sentenced to death by stoning for killing one of three men who were trying to rape her and her niece. You can see a number of interviews Afshin-Jam did on Fatehi in the video slideshow below. Following her success in Iran, Afshin-Jam started the Stop Child Executions charity, to which Hello donated, to help other young people facing death sentences. On top of all her humanitarian work, Afshin-Jam is also a talented musician. She released an album, "Someday," in April 2007. You can see the video for the title track in the slideshow below, as well for her single "I Dance For You." Between the schooling, languages, pageants, activism and music, Afshin-Jam somehow has found time to become a licensed pilot. She holds the highest rank possible in the Royal Canadian Air Cadets. (The Huffington Post, 1/13/2012)