by Peter Sereno for Critical Beauty

It’s not every day that you meet a person like Sylvia Lee. A walking paradox, it’s hard for me to come to terms that this talented young designer came from a background of software engineering. Looking at her whimsical, romantic and strangely twisted silhouettes and fabric combinations you would think that this young woman filled her waking hours with fairytales and cotton candy – not books on formulas and codes.

I have known Sylvia for quite some time now. We first made contact in early May 2010 at the launch of the Miss Universe Australia competition. She kindly offered her creations for those girls that needed a hand with their dresses, directing me to her Facebook site (how very generation Y!) www.facebook.com/sylvialeedesigns.

I was blown away by the intricacy of the designs and her understanding of lines, silhouettes and fabric. The hand of the designer is felt and seen in every piece and THAT is what makes high fashion.

Beyond the whimsical look flows an under current of strength and structure, with a boldness and bravado in mixing fabrics and colors that is both unconventional but inspired. In her I found a kindred spirit when it came to matters of fashion and glamour. Imagine my joy when Sylvia was selected to be the designer of choice for Miss Universe Australia’s evening gown in 2011.

Five laborious weeks of sweat, blood and tears Sylvia has come up with what appears to be in my humble opinion, the sexiest and most glamorous evening gown a Miss Universe Australia has worn since Jennifer Hawkins in 2004. Strangely enough, this gown shares some similarities to the Bora Couture gown Jennifer wore in Ecuador.

Born in South Korea but raised in Australia, Sylvia did not receive much familial support for her fashion obsession.

”Having my parents strongly disapprove of me undertaking fashion studies after high school, I studied software engineering at the University of NSW and managed to finish my degree and work in the industry. I felt eternally unfulfilled”.

So she played the role of dutiful daughter until a friend convinced her to enroll in a course at the prestigious Fashion Design Studio (formerly known as East Sydney TAFE).

Under the guidance and tutelage of the great Nicholas Huxley, Sylvia stretched the limits of her creativity while getting practical experience with masters such as Giorgio Armani, Akira Isogawa and Fleur Wood.

“I worked for Mr. Armani for two years. I have had the honour of meeting him and listening to him talk to and advise me in Italian, with his translator beside him translating his very words. It was truly an experience”. 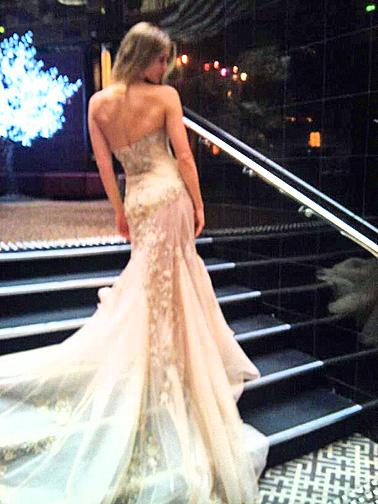 “Couture is about custom design. Custom made and lots of hand work. I love it because it gives me the freedom to be more creative, break boundaries, be more unique and special and more extravagant.”

Her creation for Miss Universe Australia in my humble opinion must be the best evening gown a Miss Australia Universe has worn in the decades I have been watching the pageant (and I have about two and a half decades worth under my belt).

The gold bustier with a nude beige tulle is encrusted with Swarovski crystals and and silver lace is sexy, elegant and gasp worthy. Fitted perfectly to show off Scherri-Lee’s curves in a mermaid silhouette it cascades into a cloud of tulle. The translucent fabric gives a peek-a-boo effect to her legs, but subtle enough not to make it vulgar.

My prediction is that debutantes and brides all around Australia will soon be emulating this style.

Expect our representative to make waves in Brazil with this gown.

According to Scherri-Lee, who couldn’t be happier, “If I saw this on the rack (and you wouldn’t) this is the kind I would go for. Maybe I will wear this for my wedding!”

Strength in self reinforced by knowing one’s own identity is Sylvia Lee. A dedicated and proud couturier, her passion drives her to go harder and to prove that you can only turn your back on your passions and dreams for so long – it eventually catches up! With plans to open an online boutique soon, remember the name – you saw it here first!