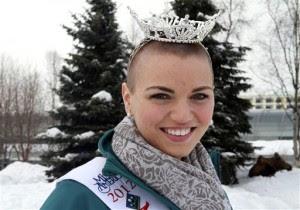 The Miss Alaska pageant requires contestants to perform a public service project. Under Debbe Ebben's silver tiara is evidence of hers.
The reigning Miss Chugiak-Eagle River has raised more than $4,000 for children's cancer research for the St. Baldrick's Foundation, and last weekend, delivered on a promise to people who pledged by allowing her brown tresses to be buzzed off.
She's proud of raising money, but the underlying message is for children who lose their hair because of cancer treatments.
"You're proving it's OK to be bald regardless of whether you chose to be or not," Ebben said.
Ebben, 23, stands 5-feet-4 inches tall, and her official talent is playing the piano. She has been entering pageants affiliated with Miss Alaska since 2007. She used scholarship money to attend the University of Alaska Fairbanks for four years. She was motivated to get involved with St. Baldrick's by another beauty queen, Miss Virginia 2008 Tara Wheeler. Near the end of her reign, Wheeler decided to raise $50,000 for St. Baldrick's and pledged to become a "shavee" if she reached her goal.
"She inspired me to get involved with them," Ebben said. "She did it kind of on the side after her reign. I decided to make it my entire personal platform."
Ebben was looking for a different kind of community project.
"It's my job as a title holder to make a really bold statement, and to be someone that people can look up to, and make an impact on the community. And that was really why I fell in love with it. It was something that was different. It was something that was unique. It was something that I could do and accomplish in a community and was something that everyone could get involved with."
Everyone included her mother Julie, who also pledged to shave her head. Debbe Ebben's turn began with auctioning off ponytails of her hair. KTUU-TV in Anchorage reported the shearing.
"It looks like I'm the Who from Whoville," Ebben said. A barber finished the job.
Ebben has not decided whether to grow her hair out as the Miss Alaska Pageant approaches in June, with the chance to compete in the Miss America Pageant. She may, she said, rock the current hairdo. She doesn't think stubble will hurt her chances.
"I don't see it as anything negative. Girls wear extensions. Girls wear weaves. Girls wear wigs. There's no difference. The true beauty is what you emanate yourself. That's really what the Miss America organization is about. It's not what you look like, it's how you represent and carry yourself."
Alisa Parrent, director of the Miss Chugiak-Eagle River program, calls Ebben courageous and said the sacrifice of her hair for a cause demonstrates how pageants are more than swimsuit competitions. Parrent also sees how it could affect a child.
"There's a lot of young girls who are just recently being diagnosed with cancer, that are going to be faced with losing their hair, and maybe they've always dreamed of being Miss America, and the idea of losing their hair is just devastating to them," Parrent said. "So to see Debbe, who is a beauty queen, and who says it's OK to beautiful and to be bald, that's just really touching."
St. Baldrick is not a real saint. The name morphs "bald" with "St. Patrick," said spokeswoman Traci Shirk by phone from Monrovia, Calif. The organization began on March 17, 2000, when three insurance executives turned a St. Patrick's Day party into a head-shaving event to help children with cancer. The organization now raises money for childhood cancer research grants and has pulled in nearly $16 million this year. Events are held year-round, but nearly 800 are scheduled for March, Shirk said.
"It's pretty extraordinary when any female does it," she said of head shaving. "It's always a bigger stand, just because you know, hair and women. But definitely a beauty queen _ someone who's in the spotlight ... we're really honored to have their support."
Ebben's experience, along with her work with Children's Miracle Network, a Miss America cause, has shaped more than her hair. Instead of engineering, she's now studying to be a "child life specialist" working with children in hospitals.
"They're kind of the in-between, go-to person to put the kid at ease, describe things to families, and interact with them at the hospital and really be a positive role model for them," she said. "You could say that pageants really led me to that career."
AP Photo/Dan Joling
SOURCE: Associated Press, 3/15/2012