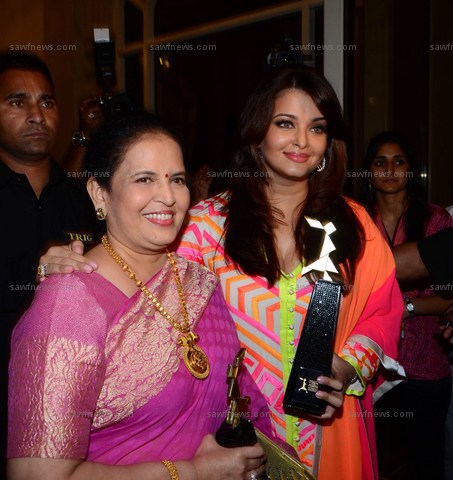 Aishwarya Rai poses with her mother Brindya Rai at the L'Oreal Paris Femina Women Awards 2012 at Hotel ITC Grand Central in Parel, Mumbai on Thursday, March 22. Photo Credit: Imagesmith
March 23, 2012, (Sawf News) - Aishwarya Rai looked excruciatingly beautiful in an Abu Jani Sandeep Khosla Georgette Sherwani at the L'Oreal Paris Femina Women Awards 2012 in Mumbai Thursday, March 22. So beautiful that anyone seeing her standing all by herself could be mistaken into believing he / she was in heaven seeing an angel! So it was just as well Aishwarya's mother Brinda, the gene bank that Aishwarya cashed in on, was by her side at the event, perhaps to reiterate that Aishwarya is one from amidst us, even if she is the only one bestowed with so much beauty!
Motherhood adds to a woman's beauty and that works even when you are already the most beautiful woman that anyone can imagine. You just have to re-imagine! Such is the law of the land! The 38-year-old new mommy was honored with "The Iconic Woman of Worth" Award, presented by Nathalie Gerschtein, Director, L'Oreal Paris. Aishwarya's off-white Sherwani was accented with neon colored chamois satin strips. The long sleeve top featured a V neckline, front button detailing and hem hitting just above the ankles. She paired it with a yellow churidar and stole in colors matching the sherwani. The dress is from the designer duo's soon to be launched Neon Strip Collection. Its a brand new concept, says the designer house introducing a completely new range of colors. She accessorized with Armani T-strap nude satin heels, oval diamond hoop earrings and an exquisite ring in her right hand ring finger. Her deep auburn colored hair, styled in loose waves with a side parting, draped her shoulders, with bangs framing her forehead. Her makeup perfectly balanced the bright colors of her dress and the high wattage mommy glow! She wore shimmering pink lipstick; with the lips being painted in the shape of flower petals, slick of pink blusher, thick black liner on top lashline, smudged kohl liner on lower lashline and lashings of mascara. Aishwarya was also a presenter at the Awards show. She presented the 'Who's Worth it Award' to Nicola Esteves. Nicola was nominated for the award by her husband Anand Esteves.
Aishwarya also honored her mother on stage with a special 'She's Worth it Award,' as the one person who has inspired her through her life and the one person Aishwarya has always aspired to be! "She is the nucleus of my existence; who has gently molded me, shaped me, picked me up when I've been down, has faith in me and taught me to be the very best version of me that i can be," Aishwarya added.
It was first Awards show Aishwarya attended since birth of her daughter, Aaradhya Bachchan, on November 16.