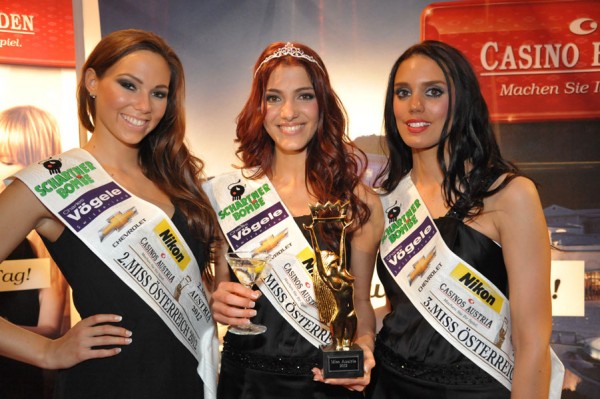 Amina Dagi (photo, center), 17, of Vorarlberg was crowned as Miss Austria 2012 on March 30th at Casino Baden. She will compete in Miss World 2012 to be held in Ordos, Inner Mongolia, China on August 18th. The first runner-up is Stefanie Steinmayr from Oberösterreich (left) and the second runner-up is Marisa Gerhardter of Salzburg (right). Dagi was born in Dagestan, a federal republic of Russia located in the Northern Caucasus.  Eighteen young women competed in this year's pageant. Austria has won Miss World twice in the past: Eva Rueber-Staeir (1969) and Ulla Weigerstorfer (1987).
Could Amina bring Austria its third crown?
SOURCE: Vienna.at, 3/31/2012