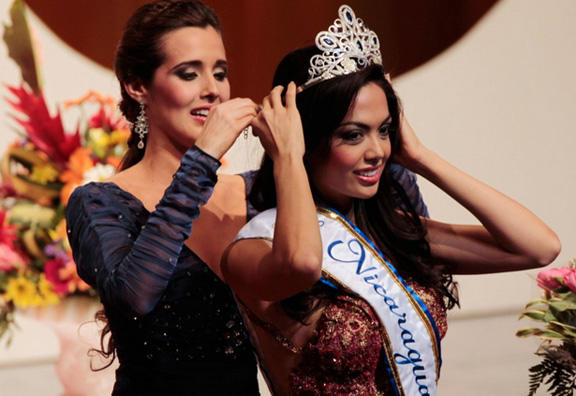 Farah Eslaquit from Masaya was crowned Miss Nicaragua at the National Theatre in Managua Saturday.
The 20-year-old beauty was crowned by Miss Nicaragua 2011 Adriana Dorn and will represent Nicaragua at Miss Universe 2012 in December.
Besides Farah, 23-year old Keykoll Montalvan from Lean is the first runner-up. She will represent the country at the Miss International 2012.
The beauty pageant is the national contest in Nicaragua, traditionally held at the Rubén Darío National Theater. The pageant has been held annually since 1955, selecting the nation's representatives to the Miss Universe and Miss International.
For the current year, the other three final participants who competed for the crown were Violeta Majano of Granada, Reyna Perez of Chinandega and Claudia Cuadra of Managua.
Though the Nicaragua has had only two Miss Universe semifinalists to date, yet the country has done well in other international beauty pageants.
SOURCE: International Business Times, 3/18/2012