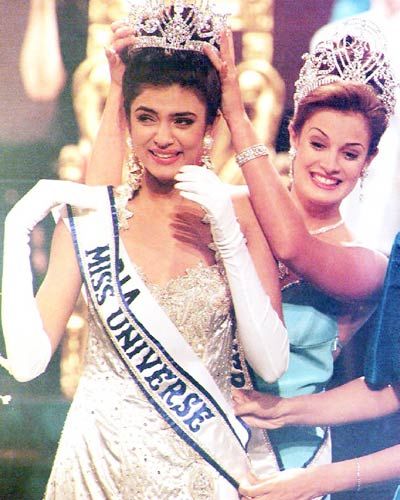 DURING the Miss Universe pageant of 1994 in Manila, five judges had clearly in mind which candidates they wanted to be finalists, as reflected by the 9.9s in the scores: Zapata, a Colombian, had already favored Miss Colombia (Carolina Gomez) and Miss Venezuela (Minorka Mercado); Larue and Dalton chose Miss Venezuela; Quo chose Miss Philippines (Charlene Gonzalez) and Miss India (Sushmita Sen); and Grudt (Miss Universe 1990 from Norway) favored Miss India. One could already see the great disparity in judging between Zapata (who gave Miss India an average score of 8.7) and Grudt (who gave Miss India an average score of 9.9). Miss India performed well - if not, the best - during the interview. Her responses had structure, substance and depth. Compare her performance with that of Miss Italy (Ariana David), whose choppy sentences reflected her nervousness; yet despite her flaw, Zapata gave her one point higher than Miss India whereas McCord gave her a 9.8! It is also interesting to note that Zapata, who is a fashion designer, only gave an average score of 8.7 to Miss India who is a model. Compare Miss India's 8.7 to that of Miss Brazil,Leila Schuster (another fashion model), who was given a 9.7 by fashion designer Pamela Dennis during the 1993 pageant. This disparity in scoring underlines the fact that not all fashion designers have the same taste for models.

What is perhaps most interesting is that both candidates from Colombia and Venezuela resemble their respective predecessors. Carolina Gomez echoed Paula Bettencourt's Kim Nova-esque look. Carolina, like Paula, wore a very tight sequined dress and high heels and both beauties sported a very narrow waistline. Minorka Mercado is nearly a replica of Milka Chulinas - both are at least six feet tall, brunette and possess a photogenic smile.

- During the selection of the semi-finalists, the candidates wore identical outfits and accessories (earrings and bracelet) made of capiz shell which is indigenous to the Philippines.

- Filipinos love beauty pageants! Next to the U.S., the Philippines have the most number of beauty pageants held annually, and now competes with India in terms of producing the most number of beauty queens in Asia! Most of all, Filipinos know how to stage pageants, and that is why the Miss Universe Organization enthusiastically elected Manila as the 1994 site because everybody knew that every candidate would be treated like a celebrity by Filipinos. Miss Universe 1993, Dayanara Torres of Puerto Rico, can attest to this: she fell in love with the Philippines that she decided to live there for three years!

- Rumor had it that the only reason Miss Philippines (Charlene Gonzalez) won the Best National Costume Award was that the jury assigned to select the winner comprised entirely of Filipinos. Eventually such rumor had been found to be true.


- During the swimsuit competition, Miss Philippines nearly slipped as she was sashaying on the stage to join the other semi-finalists. However, she quickly regained her composure.
- During the interview competition, when host Bob Goen introduced Miss Sweden (Dominique Forsberg) as someone who speaks five languages, the Swedish beauty smilingly said "no" while Goen remained oblivious to it.

- During the selection of the ten semi-finalists, nothing was mentioned about the backdrop of the magnificent and near-perfect Mayon Volcano.


Photo courtesy of the Miss Universe Organization
at 8:09 PM