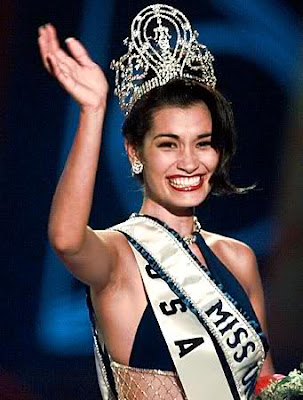 The Year of the Brunette


THIS YEAR'S pageant seemed special because of the controversy regarding Alicia Machado's weight and the possibility of her dethronement. Donald Trump, the owner of the Miss Universe Organization, decided not to fire Alicia and instead supported her in losing weight.
The jury comprised of two Hispanic celebrities (Cuban Cristina Saralegui, hostess of her own talk show at the Spanish network Univision, and Carolina Herrera, a Venezuelan-born fashion designer); four Americans (Ford, O'Brien, Billie and Love); and three Europeans (models Herzigova and Seynhaeve and modeling agent Pillard). There is no doubt that Herrera rooted for Miss Venezuela (Marena Bencomo) to win or at least to be in the top three; in fact, Herrera gave Marena an average score of 9.9, compared to her second best candidate, Miss Panama (Lia Borrero), whom she gave a 9.0. Herrera couldn't care less about the other semi-finalists, as proven by the scores in the 8s that she gave them. On the other hand, modeling agent Pillard found buxomy Miss Venezuela the least favorable by giving her an average score of 8.13, and slender Miss Italy as her favorite with a score of 9.83.
The Judges
How the Judges Voted

- Alicia Machado's presence (she looked wonderful) underscores the truth about certain beauty queens: they may stumble but they never fall. Alicia proved to be the star of the evening as she carried herself with pride and dignity after having encountered too much negativity from the press.
- The presence of the first black Miss Italy (Denny Mendez), whose extraordinary looks and movements made her a popular candidate to win.
- Except for a blonde Miss Venezuela, the other five finalists are all brunettes or women of color (Miss Curaçao, Miss USA, Miss Panama, Miss Italy and Miss Trinidad & Tobago). This year's pageant proved that there is beauty in diversity.
Downers
- The biggest mistake was to hire George Hamilton as this year's host. Not only was he sometimes not on cue, but his flirtatious innuendos (dancing the tango with Miss Estonia and coaxing Miss Venezuela to dance the flamenco) seemed highly undesirable and unbecoming of a host.
- Thumbs down on judge Billie for giving Miss India a 6.59 in the evening gown competition!
- Alicia Machado's "unqueenly" attitude during the coronation of the winner, Miss USA (Brook Lee). It is traditional that the predecessor give a congratulatory kiss to her successor, but that wasn't the case with Alicia who looked upset that her compatriot Marena Bencomo did not win the title! Not only that, Alicia just rudely dumped the crown on Brook's head and walked away.
- The introduction of a 900 number for people to call if they had any comment relating to the question, "Should physical appearance be a requirement for winning the title?" This whole idea is tacky and should be done away in future pageants.
- Enrique Iglesias' performance was less than spectacular, and his outfit even less appealing.


Photo courtesy of the Miss Universe Organization
at 6:49 PM