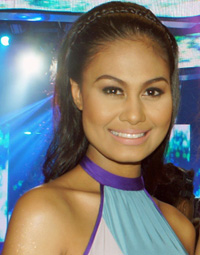 MANILA, Philippines – Behind the all-smiles facade on stage during the international pageant, Miss Universe 2010 fourth runner-up Venus Raj (photo, right) said there were goings-on backstage that she now recounts to be less than pleasant experiences. The always “thankful,” ever-smiling Philippine pride shared on “Showbiz Inside Report” Saturday that she didn’t get along with all her fellow candidates during her time in Miss Universe.

Zevallos had previously joined the international Miss Earth pageant in 2008, which was held in the Philippines.

“And then nung nagkita kami doon (Miss Universe 2010), magkalaban kaming dalawa. At hindi niya makalimutan na chaperone niya ko noon sa Pilipinas,” Raj said. “Pagka tinatawag niya ako, sabi niya, ‘Chaperone, chaperone, come here! Take our photo!’ O ngayon, magkalaban na tayo.” [Translation: "And then when we saw each other in Miss Universe 2010, we competed against each other. And she could not forget that I was her chaperone in the Philippines. When she would call me, she would say, 'Chaperone, chaperone, come here! Take our photo!' And now, we're competitors!"]

Whereas Raj placed fourth overall in the pageant, Zevallos didn’t make it to the finals. “Hindi rin siya nanalo sa pageant,” Raj said, adding in jest, “So ang feeling ko, masaya.” [Translation: "She didn't win the pageant, so I felt a bit happy."

Raj also recounted the “pins” incident that dragged her name in an alleged sabotage against then-Miss Australia Jesinta Campbell.

"Napagbintangan ako na nanabotahe raw ako sa kapwa ko kandidata, si Ms. Australia. Sinabi niya sa isang interview, nilagyan ko daw ng mga pins ang kanyang national costume, kaya raw nagkandasugat-sugat ang kanyang likod,” Raj said, but insisted, “Malinis naman ang konsensya ko.”[Translation: "I was blamed that I was sabotaging the winning chances of my fellow candidate, Miss Australia. She said during an interview that I had inserted pins in her national costume and that's how she got wounds on her back. My conscience is clear."

Campbell, who went on to become second runner-up in the pageant, later withdrew mention of Raj’s name in the alleged incident [link: http://www.abs-cbnnews.com/video/entertainment/09/13/10/ms-australia-di-sangkot-si-venus-sa-pananabotahe].

From doing chaperone duties for beauty queens to becoming a beauty queen herself, Raj has come along way since her win in the 2010 international pageant.