April 29, 2012
Last Friday night, I had the privilege to judge the Mr. and Miss HIV Vaccine 2012 pageant held at Boston's Club Café. The event was sponsored by The Fenway Institute at Fenway Health, Latino Health Institute, and Brigham Womens Hospital, and organized by an amazing team led by my good friend, Coco Alinsug. 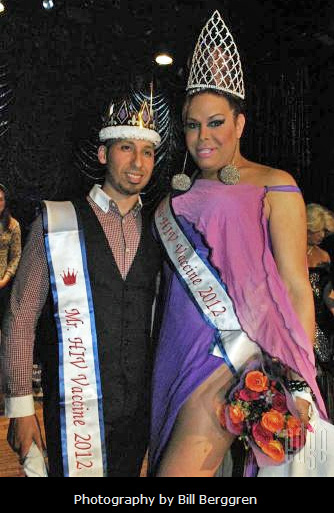 The contest attracted nine contestants, four in the Mr. division won by Archimides Maldonado, and five in the Miss division won by Jackie "Boquita" Tavarez (above photo).  The Mr. contestants were judged in casual dress introduction, athletic wear presentation, and evening wear Q & A. In addition to these three elements, the Miss contestants also had to perform by lipsynching songs of their favorite singers.
Since I have never judged this kind of pageant before, I made sure not to incorporate criteria associated with traditional beauty pageants, such as symmetry, proportionality, facial beauty, or perfection. However, there are certain elements during a competition  - regardless of the type of pageant - of which every contestant must be aware, such as eye contact with the judges and sashaying all the way to the stage and posing. Even though each Miss contestant was specifically asked to do a maximum of 2-minutes of talent presentation, all five performances had an average duration of at least 8 minutes. Some were better than others, and some were just dragging (no pun intended). For all it's worth, the general ambience in the café was that of pure fun - thanks to the divine talent of the guest performers Mama-savannah'georgia (a Bette Midler impersonator), Anthony Nikitalefemme Bovenzi (who performed Nicki Minaj songs), and the event's highly entertaining and amusing Lakia Mondale.  Lastly, the genuine camaraderie among the staff and the contestants, as well as the benevolent spirit behind the event, made it an affair to cherish forever.
During their reign, the winners will serve as ambassadors for HIV Vaccine Research, promoting the cause while appearing at local venues and performances and creating opportunities for community members to learn about research participation. They will also grace the float of the Fenway Health Institute during Boston Pride 2012 in June.
To see more photos from the event, visit EdgeBoston.com and the Facebook page of the event.