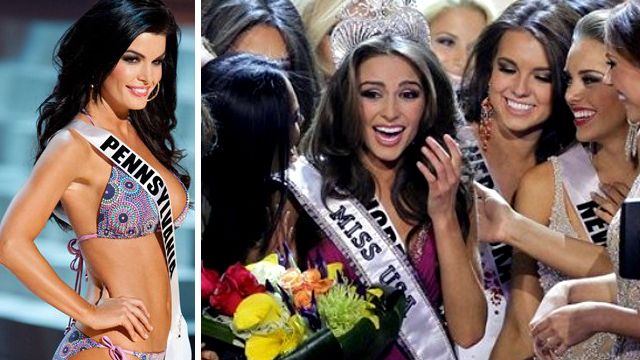 The Miss USA “rigging” controversy continues.
This week, a second unnamed contender came forward to FOX411.com to back up claims made by the now-retired Miss Pennsylvania Sheena Monnin that she heard Miss Florida repeat a list of the pageant’s top five long before the finalists were announced.
Now a source close to the pageant tells FOX411’s Pop Tarts column that following the second beauty queen’s allegation, this year’s contestants began receiving calls on Wednesday from the Miss Universe Organization's (MUO) legal department, and that all of the beauty queens will be questioned in the coming days over what they may or may not have seen or heard backstage.
“There are apparently a handful of girls who are being very vocal about it all and said they heard something,” said our source, adding that at least one other contestant had privately confirmed the story put forth by Monnin and the second anonymous pageant contender.
The Donald Trump-owned Miss Universe Organization (MUO), which also operates the Miss USA contest, has vehemently denied the allegations of pre-show fixing, and filed a lawsuit against Monnin over her accusations.
FOX411.com has also been told that the 2012 Miss USA contestants have started a private social media group and are discussing the incident and allegations amongst themselves.
“Other girls want to come out and talk about it openly, but they’re scared,” said the insider.
Reps for MUO and Donald Trump did not respond to a request for comment regarding the calls from the legal department and the third contestant’s private confirmation of Monnin’s allegations.
Trump did however call into TMZ Live on Wednesday to address the situation.
"There is no list, it is impossible. You have Ernst & Young standing there tabulating everything, you have standards and practices from NBC,” he said. “You have a panel of celebrities who put down whatever they think. Nobody cares who the top five are. What difference does it make? Nobody cares who the top 15 to five is, whoever it is it is. What difference does it make? I will say this; if (daughter) Ivanka Trump was a contestant, I would care."
Ernst & Young, the accounting firm that overseas the scoring at the Miss USA pageant, released this statement Thursday.
"Ernst & Young's role in the Miss USA pageant is to independently tabulate the judges' votes and verify the results during the live broadcast. Throughout the Miss USA 2012 live broadcast, the eight celebrity judges individually submitted their votes which we independently tabulated. In each case, the results of the tabulations remained under Ernst & Young's control until we presented them to the hosts during the live broadcast.
"Ernst & Young tabulated the list of the top ten Miss USA finalists after the swimsuit competition was completed and then tabulated the list of the final five Miss USA finalists after the evening gown competition was completed. No one could have seen either list beforehand, because they did not exist until they were tabulated by us."Therefore, neither the Miss Universe Organization, Donald Trump, NBC, the eight celebrity judges, nor any of the contestants could have known who the final five Miss USA finalists were before the evening gown competition was completed and the tabulation was verified by Ernst & Young during the live broadcast."
SOURCE: Fox News, 6/14/2012