Miss New Zealand told to give up her tiara 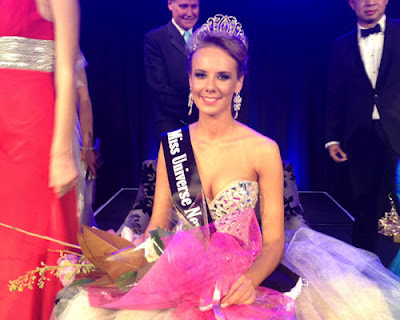 The winner of Miss Universe New Zealand has called in lawyers after being told to give up her tiara by organisers.
The New Zealand Herald understands director Val Lott has delivered a letter to 22-year-old Avianca Bohm (photo), who was crowned this month, advising her that she is ineligible to represent New Zealand.
She also held a meeting with Ms Bohm in an effort to persuade her to quietly give up her title.
This year's beauty pageant quickly turned ugly when it emerged Ms Bohm, who was born in South Africa, does not have New Zealand citizenship. It has also emerged Miss Otago, who was third runner up, is an Australian citizen.
Yesterday neither Ms Lott nor Ms Bohm could be contacted.
But the regional licensee of Miss North Harbour, Melissa Martin, welcomed the decision, which would crown runner-up and Miss North Harbour Talia Bennett.
"The young woman is just ineligible to hold the title. It's not a witch hunt," she said.
"It's right and wrong. It's black and white - there's no grey area here."
However, Ms Bohm has sought legal advice in an attempt to continue her reign and has the backing of the competition's head judge, Jack Yan.
"The impression I've been getting ... is that as long as Avianca arrives at Miss Universe with a New Zealand passport, she's fine," Mr Yan said.
He said yesterday that he understood the process to speed up her citizenship was under way.
"From what I understand it will be [successful], because the exact same circumstances happened with Miss World New Zealand 2011."
Department of Internal Affairs spokesman Tony Wallace said he could not comment on individual applications for citizenship.
However, the citizenship office does urgently process applications on humanitarian grounds or in cases where urgency is required in order to represent New Zealand.
The Minister of Internal Affairs, Chris Tremain, approves or declines citizenship.
Ms Lott was aware that Ms Bohm did not have citizenship when she entered the competition, but said she had told Mr Yan that Ms Bohm should not win.
He denied this, and after the competition Ms Lott said she was confident Ms Bohm would gain citizenship and be able to represent New Zealand.
It now appears that she has back-tracked in the face of strong protests on social media and from supporters of Ms Bennett.
The day after the competition Ms Bohm told the Herald she had been talked into entering pageants by Ms Lott, who she met in 2007.
- Nicholas Jones, New Zealand Herald
Source: APNZ, 6/15/2012