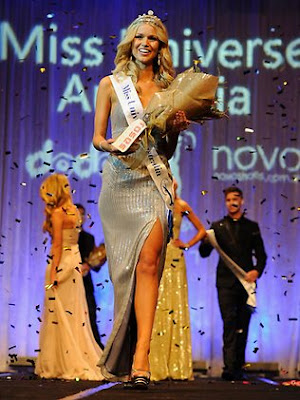 ``I've always watched but last year I followed it really closely because Scherri was in it, she's actually a friend of mine,'' Ms Ayris said.

``I was so excited for her to hand me over the crown.''

Dressed in a navy and silver cocktail dress by Perth designer Ruth Tarvydas, the 21-year-old blonde looked bright and fresh on Saturday despite having not slept a wink the night before.

The life-altering announcement still hadn't sunk in when she fronted the media for her first official press call as Miss Universe Australia.
``I'm so overwhelmed still, everything is just a blur from last night,'' Ms Ayris gushed.

The Miss Universe competition was the model's first time in a beauty pageant, but she has taken a shot at fame before.

She is an avid dancer who auditioned for a role in Baz Luhrmann's Academy Award-winning film Moulin Rouge!.

Being crowned Miss Universe Australia will open up other avenues to Ms Ayris.

As part of her duties she will be acting as the charity ambassador for Operation Smile, a children's medical charity dedicated to improving the lives of children in developing countries born
with facial deformities.

Another official responsibility will be to represent Australia in the international Miss Universe pageant in December.

There have been two Miss Universe title-holders from Australia, with Kerry-Ann Wells claiming the title in 1972 and Jennifer Hawkins in 2004.
SOURCE: Perth Now, 6/9/2012