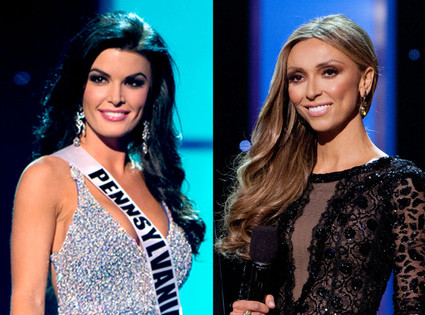 Giuliana Rancic, a two-time Miss USA host and former judge, says she was "not surprised" when she found out Miss Pennsylvania had turned in her crown after a low-tier finish at this year's competition.
"I remember her at rehearsals," the E! News cohost said while taping today's show, airing at 7 p.m. and 11:30 p.m. "She didn't seem that into it...It was almost like she felt defeated before the pageant, days before."
And what about now-former beauty queen Sheena Monnin's claim that the 2012 Miss USA pageant was rigged?
"There's no way," Rancic told cohost Jason Kennedy. "I was a judge years ago, and I've hosted it twice. There is no way that...the top five are chosen before the pageant, it's ridiculous. If you look at who won and how the girls scored, you can tell it really was based on the questions and the judges chose who they liked. It's ridiculous."
"You would have been looking, I know you!" Kennedy joked about the idea of Rancic discovering a list of finalists lying around.
"There was no envelope lying around," she insisted, laughing. "Ernst & Young tabulates the votes, there's no way that that accounting firm is going to let that information get out."
Donald Trump, who acquired the Miss Universe Organization in 2002, concurs. He promised yesterday that he would sue Monnin over her "ridiculous" claims, but later added that he would hold off if she publicly apologized immediately. The ball's in her court.
Meanwhile, the eventual winner of the 2012 Miss USA title, Miss Rhode Island Olivia Culpo, was asked during the show by judge Rob Kardashian whether she thought it was fair that the official rules now allow for a transgender woman to win.
"I do think that would be fair," Culpo said. "But I could understand how people could be apprehensive to take that road. There are so many people who have a need to change for a happier life. I do accept that because I believe it's a free country."
In her resignation email to the Miss Universe Organization, Monnin wrote that allowing natural-born males to compete went against "every moral fiber" of her being.
SOURCE: Eonline.com, 6/7/2012