MANILA, Philippines - Queenierich Rehman, 24, beatboxed her way to the crown.
Rehman, who showed off her peculiar singing skills during the talent portion of the 2012 Miss World Philippines contest, bested 24 other candidates at the culmination beauty pageant in Manila Hotel Tent on Sunday, June 24.
The Moroccan-Filipina basketball player from Assumption College will represent the Philippines in the 2012 Miss World competition on August 18 in Inner Mongolia, China. She also receives P1 million cash prize and a Hyundai car.
Rehman was also hailed with a Brains and Beauty award for her response during the Question and Answer portion.
She was asked this tweeted question: As an ambassador of the Philippines, what are the best features of your country that you can project to the world?She answered: "I believe that wherever you will go here in the Philippines, it's not the islands that make us special but of course the Filipinos who have warm hospitality, who are having smiles on their faces, and of course who will treat all foreigners the love and respect, and hospitality that they can give to them. I believe that the Philippines is a country that we can be proud of."Aside from the Best in Swimwear and the crown, the 24-year-old winner from Las Pinas City also bagged 4 other special awards: Miss Pantene, Miss World Traveler, Miss Photogenic and Miss Philippines Prudential.
Passing on the crown to Rehman is Miss World Philippines 2011 Gwendolyn Ruias, who successfully won First Princess (or first runner-up) in the 2011 Miss World pageant held in London.
Other winners of the competition include: 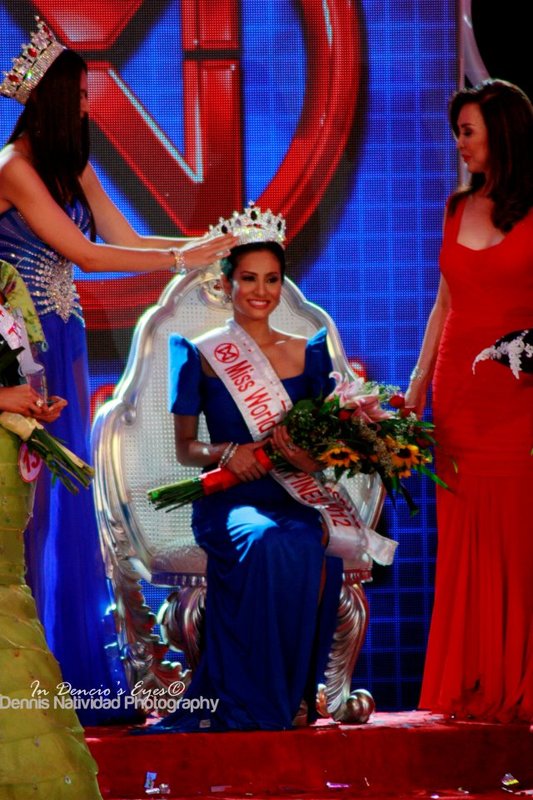