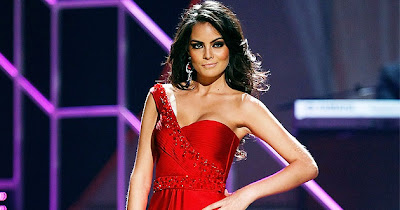 Former Miss Universe Mexico Ximena Navarrete will play the role of a mother in her first foray as an actress on the big screen in "Agente Smith" ("Agent Smith").

"I'm training very hard. I am a woman of 38 years, I have a daughter, my name will be Erika, "Navarrete said on Thursday during the pink carpet event of the 2012 Barbie Awards.

"(The character) is not that much different from my own personality, so I do not think it will be very difficult to interpret it."

The former beauty queen, 24, came to the ceremony with her ​​hair loose, wearing a  long-sleeved lace blouse in white and matching turquoise pleated skirt.

Navarrete won the Miss Universe crown in 2010. Regarding the relationship of her characters to others, she said, "I'm not kissing any leading men."

"It is a participation, not a leading role. It's a character that I like. I think it's a good starting point to be an actress," she remarked.

"Agent Smith" is a co-production by Mexico and Brazil and will begin shooting in September. Navarrete said the film's protagonist is "a famous Mexican actor" but did not reveal his name or the director.

For now, the former beauty queen will participate as a news presenter in Mexico during the London Summer Olympics. She has not ruled out telenovelas, for which she has already received offers, although she hasn't accepted any yet.